China vs. Japan: Is the East China Sea Showdown Back on? 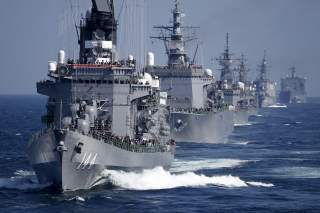 On May 28, U.S. president Donald Trump and Japanese prime minister Shinzo Abe boarded a Japanese Izumo-class helicopter carrier to reaffirm their commitment to the U.S.-Japan military alliance. Broadly publicized in Japanese media, the two leaders spoke before a joint audience of 500 members of the U.S. Navy and Japan’s Maritime Self Defense Force (MSDF).

Onboard the JS Kaga helicopter carrier, Prime Minister Abe reasserted the need for vigilance given an “increasingly severe security environment in the region.” Although Abe used an official line from Japan’s Ministry of Foreign Affairs which specifies North Korean nuclear threats and international terrorism, the prime minister’s implication clearly targeted mounting tensions with the People’s Republic of China (PRC); sources reportedly close to Abe explicated the substance and setting of the speech as addressing an “increasing need” for the U.S.-Japan alliance to project power and rebuff Chinese aggression.

PRC behavior escalating Sino-Japanese military tension extends beyond production and posture. The PRC has also increased the frequency of its maritime cost-imposition activities with regard to Japan, particularly near the Senkaku Islands, which Japan administers but the PRC claims as the Diaoyu Islands (Diaoyu Dao 钓鱼岛). Since 2012, Chinese vessels have sailed provocatively through Senkaku territorial waters, straining the Japan Coast Guard and MSDF as they respond to the Chinese presence. As described in a recent RAND report, the number of Chinese vessels near the Senkakus has occasionally surged, and the sustained Chinese presence over several years taxes Japan’s administration of the contested islands by stressing limited service capacity and weathering the Japan Coast Guard’s operational readiness.

While many Chinese vessels entering Senkaku territorial waters are ostensibly civilian fishing boats or possibly vessels representing the para-naval People’s Armed Forces Maritime Militia or Chinese Coast Guard, the PLA has also increased its presence in the East China Sea (ECS), conducting more ECS military exercises in 2018 and the first five months of 2019 than was typical in prior years.

Although the PRC does not publish official records of its military exercises, analysts can use sailing warnings (hangxing jinggao 航行警告) published by the PRC Maritime Safety Administration (MSA) (zhongguo renmin gongheguo haishiju 中国人民共和国海事局) which indicate military exercises as a reasonable proxy for the frequency and duration of actual exercises in China’s near seas. These sailing warnings only include high-level descriptions such as that there are military operations (junshi renwu 军事任务) or live-fire drills (shidan sheji xunlian 实弹射击训练) occurring within designated boundaries; because the warnings do not confirm that these operations are being conducted specifically by the PLAN, this article refers to PLA exercises rather than PLAN exercises.

Notably, in 2019 PLA ECS exercises also began earlier in the calendar year than is typical. As shown in the graph below, PLA exercises in the ECS typically do not begin until late spring, starting no earlier than May and peaking July through September; this year, exercises began in March with a frequency typical of midsummer. Additionally, exercise days in May 2019 exceed total exercise days for any single month for which MSA data is available.

Japan’s contributions to Sino-Japanese military tensions are also sizeable, exemplified by Prime Minister Abe’s deft management of the U.S.-Japan alliance and growing assertiveness toward the PRC; as he reminded listeners from the JS Kaga, in late 2018 the Abe government approved National Defense Program Guidelines authorizing a long-expected conversion of its two Izumo-class helicopter carriers into aircraft carriers retrofitted to carry aircraft capable of short take-off and vertical landing (STOVL). Of the 147 F-35 aircraft Japan intends to purchase from the United States, forty-two will be STOVLs.

The Global Times, an international affairs publication under Chinese Communist Party (CCP) mouthpiece People’s Daily, criticized the guidelines as ones which change the Japanese Self Defense Force (SDF) vessels’ “nature from a defensive to offensive one” and are likely to perturb East Asian stability. Japan is similarly committing to an accelerated military buildup in conventional and cyber capabilities and has on at least one recent occasion intercepted Chinese aircraft in disputed airspace.

Beyond Japan’s remilitarization, PRC analysts have also expressed concerns about the Japanese Foreign Ministry’s efforts to build a tacit coalition aligned against the PLA. Chinese media has commented on how Japanese “rearmament” is escalating PRC threat perceptions, and significant Chinese academic literature published in recent years argues that Japan’s current policy of “strengthening multilayered cooperative relationships with allies and partners” within the U.S.-Japan military alliance, which Chinese analysts commonly term networkization (wangluohua 网络化), is a destabilizing regional force. Chinese concerns about Japanese diplomatic efforts are well-founded: even as Japan’s Foreign Ministry seeks a bilateral security dialogue to defuse tensions in the East China Sea, the Abe government pursues closer security coordination with regional powers, including Taiwan, to balance against the PLA.

Chinese maritime aggression can be quantified. Although naval exercises alone do not define the Sino-Japanese relationship, upticks in these cost imposition activities are meaningful indicators of growing PRC aggression and drive an increasingly severe regional security environment. Rapprochement between the two states cannot arise until this ends.

To what end the PRC has adopted these coercive tactics and what costs it is willing to pay to sustain them remain to be seen.

Howard Wang is a graduate of the Georgetown University McCourt School of Public Policy.