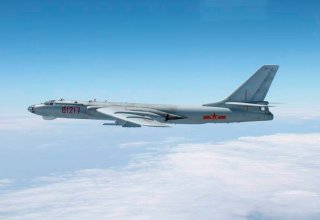 Andersen Air Force Base, which is located in the United States territory of Guam, remains the most important U.S. airbase west of Hawaii and it is the only base in the Western Pacific that can permanently service U.S. heavy strategic bombers including the B-1B Lancer, B-2 Spirit and B-52 Stratofortress. It would be a crucial part of any American military operation in the event of war in Asia.

It is for those reasons that the Chinese People's Liberation Army Air Force (PLAAF) released a video on its Weibo social media account over the weekend that presented a simulated attack on Andersen AFB. The release of the video came as China also carried out a second day of drills near Taiwan, which were conducted as a direct response to the visit of a senior U.S. State Department official to Taipei.

According to reports, the two minute and 15-second video, called "The god of war H-6K goes on the Attack!" featured high production values and even dramatic music that would accompany a big budget movie production. It shows a PLAAF H-6 bomber take off from a remote base and halfway through the pilot is seen to launch an attack on a distant runway – the satellite image shown is almost an exact layout for Andersen AFB.

The Chinese military had only officially revealed the H-6J bomber after drills in July. It is an upgraded variant of the decades-old H-6, a large bomber platform that first took flight in 1959. Due to its size and longevity the H-6 has been compared to the American B-52, which has been flying for 60 years and shows no signs of retiring soon.

The Western Pacific island of Guam is six thousand miles from the coast of California, and it has been an American territory since it was ceded to the United States as part of the Treaty of Paris of 1898, which officially ended the Spanish-American War.

The island was attacked and occupied by the Japanese for thirty-one months during the Second World War, until it was liberated during the hard fought Battle of Guam from July 21 to August 10, 1944.

Throughout the Cold War and to the modern-day, Guam has been a major strategic base for a variety of U.S. weapon systems and has been a critical part for maintaining the air-delivered leg of the nuclear triad in the Pacific region. In 2017, North Korea threatened to attack Guam, and then-Secretary of Defense Jim Mattis made it very clear that the United States would "take out" any missile headed toward the island and would respond with the full weight of U.S. might.

This isn't the first time that a video has shown such an attack on a U.S. target. Especially notable in this instance are the production values, which could suggest that the PLAAF had some help in producing the video.

China is currently home to the third-largest film industry by number of feature films produced annually and has some of the world's largest film studios in the world. The Chinese film industry has produced many big-budget war epics, and the war drama The Eight Hundred, which chronicles the Battle of Shanghai during the Second Sino-Japanese War, has become the highest worldwide box office release of 2020.

It is quite likely a PLAAF was lent a hand in the production of the video, and it is apparently far more convincing than a video released by North Korea in recent years. Those videos, which showed nuclear launches against U.S. cities and other targets, had graphics that appeared to be from a dated video game. One of the most recent videos featured a simulated attack on Guam, so perhaps the PLAAF simply wanted to show how an attack on the U.S. territory might actually look by producing a far more believable simulated attack clip.