Much Like America's B-52, China's H-6J Is An Old Bomber That's Learned New Tricks 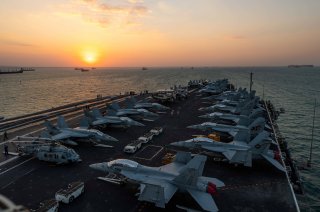 Here's What You Need To Remember: While many of the technical details of China’s upgrades to the platform may not be known, the move to sustain the older airframe does align with what the U.S. has been doing with the B-52. The premise here is to leverage a “still viable” airframe and add new electronics, radios, communications systems, intelligence data, targeting, avionics, EW and of course, weapons.

The combat exercises, described in the Chinese-government backed Global Times as “intensive round the clock drills,” were in part designed to assess the H-6Js ability to operate in all weather conditions and strike moving maritime targets.

The H-6J is an upgraded variant of the decades old H-6, a large bomber platform which first flew as far back as 1959. Its size and longevity, interestingly, appear to parallel the Vietnam-era historic B-52.

“H-6J can carry seven YJ-12 supersonic anti-ship cruise missiles, with six under the wings and one in the weapon bay. The H-6J's weapon capacity is about twice that of the H-6G, with 50 percent farther combat radius to about 3,500 kilometers,” the Global Times writes.

While many of the technical details of China’s upgrades to the platform may not be known, the move to sustain the older airframe does align with what the U.S. has been doing with the B-52. The premise here is to leverage a “still viable” airframe and add new electronics, radios, communications systems, intelligence data, targeting, avionics, EW and of course, weapons.

Given this kind of strategy, it makes sense that the B-52 is an almost entirely new plane when compared to its days as a carpet bomber decades ago. The U.S. Air Force plans to fly the B-52 for several more decades by sustaining the airframe and simultaneously adding a wide sphere of new technologies; the aircraft has a new inflight intelligence-data sharing system enabling crews to receive mission updates and new target information while in flight; the B-52 continues to receive a new complement of sensors and EW weapons and, more recently, the aircraft is being configured with a newly designed internal weapons bay designed to massively improve the volume and range of weapons on board.

The new Chinese bomber presents some interesting similarities. While it has a slightly different fuselage and external shape, reports that it has all weather sensors and an ability to hit moving targets at sea are without question new technological capabilities. Sensors less obscured or hindered by weather have been fast-emerging, often using things like millimeter waves. However, the ability to hit moving targets is quite significant. This brings several things to mind, such as self-guiding rounds, advanced air-launched cruise missiles, and newer kinds of targeting systems, many of which are now emerging with the U.S. military. Hitting moving targets would adjust, and sizeably expand, the mission purview for the bomber which, like the B-52, has primarily been thought of as a land-attack area weapon.

Therefore, a new, much more capable Chinese large bomber could potentially rival the U.S. B-52, provided the upgrades are as substantial as the report claims.