A Cold War Between the U.S. and China Would Be a Dangerous Affair 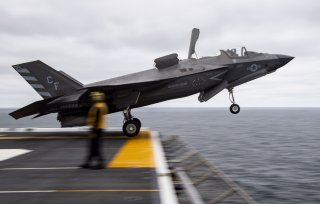 Is the United States on the brink of a new, dangerous Cold War with China? Is one already underway?

Certainly, many are aware that tensions between the two countries are at what some would call an all-time high. The coronavirus pandemic and stepped up surveillance and training activities by both countries in the South China Sea have further strained relations.

All of this is happening within the broader context of rapid Chinese military modernization, force expansion and increased efforts to strengthen Beijing’s international military and economic influence. For instance, China is the world’s leading producer of solar panels and wind turbines, as well as many kinds of electronics. China makes iPhones used by U.S. customers and is a world leader in manufacturing high-tech electronic parts such as circuits, computer chips and other components.

How might a modern U.S.-China Cold War impact both countries? Will it be anything like the U.S.-Soviet dynamic? An interesting essay in the New York Times makes the case that a U.S.-China Cold War would take on a wide sphere of complex, varied and highly impactful dynamics.

For instance, the essay points out the enormous economic interdependence between the two countries, as China manufactures an exorbitant amount of products for export and sale to the United States.

China relies on U.S. purchases of its products and U.S. companies leverage the lower labor costs made possible in China. China has greatly expanded its economic ties throughout the world and made new incursions into emerging economies such as places in Africa and the Middle East. Granted, America has a global economy as well.

Ultimately, what all of this amounts to is that should many of the cooperative ties be heavily strained or broken, the consequences of disentangling key economic interdependencies would be significant.

There is also enormous technological military competition and tensions between the two countries, particularly in the areas of hypersonics, artificial intelligence and quantum computing.

China operates a million-strong Army and is working to build drones, fighters, armored vehicles and other platforms just a few years behind U.S. technology. Furthermore, many of China’s weapons appear to closely mirror or replicate America’s due to copycatting or outright design theft. This is particularly true with regard to the J-30 stealth fighter’s similarity to the F-35, China’s VT5 light tank’s similarities to the U.S. Mobile Protected Firepower vehicle and how maritime-specific surveillance drones bear a great resemblance to the U.S. Triton drone.