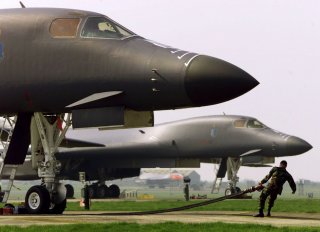 B1-Bs and B-52s have been conducting bi-lateral war game maneuvers with Japanese Air Defense Forces, according to a statement from Air Force Global Strike Command.

While the Air Force statement did not specifically mention China, or refer to the emerging India-China conflict, the comments did specify the “Indo-Pacific” region and cite the “uncertain security environment.”

Although the Bomber Task Force movements were described as routine, it takes little imagination to recognize that such maneuvers are likely to take on added significance and urgency in light of growing violence and tension along the Indian-Chinese border.

Interestingly, the most recent deployment specifically launches B-52, combat-tested aircraft which, due to upgrades, are now almost nothing like the classic Vietnam-era bomber. While the basic airframes have withstood the test of time, the B-52 continues to receive high-tech adjustments to ensure the platform remains effective in modern, higher-threat environments.

No longer used primarily as a “carpet bombing” platform, the bomber can drop advanced precision bombs, network intelligence information in-flight due to advanced digital data links and increase mission dwell time and effectiveness with a newly engineered Internal Weapons Bay Upgrade. Moreover, the 1760 Internal Weapons Bay Upgrade will allow the B-52 to internally carry up to eight of the newest “J-Series” bombs in addition to carrying six on pylons under each wing. The digital data links enable B-52 pilots to receive new intel while “en-route” due to new connectivity with aircraft and ground-commanders.

Pilots and B-52 modernization experts have said that having an increased internal weapons bay capability affords an opportunity to increase fuel-efficiency by removing bombs from beneath the wings and reducing drag. The first increment of IWBU integrates an internal weapons bay ability to fire a laser-guided JDAM, officials said.

Developers have added that a second increment, that will be completed by 2022, will integrate more modern or cutting-edge weapons such as the Joint Air-to-Surface Standoff Missile (JASSM Extended Range) and a technology called Miniature Air Launched Decoy (MALD). A MALD-J “jammer” variant, which will also be integrated into the B-52, can be used to jam enemy radar technologies as well.

A more effectively armed B-52 enables the aircraft to linger for longer periods of time in deterrence missions and allow more time for pilots to identify multiple targets on a single mission.

“It is about a 66 percent increase in carriage capability for the B-52, which is huge. You can imagine the increased number of targets you can reach, and you can strike the same number of targets with significantly less sorties,” an Air Force official said in an interview on the IWBU several years ago.