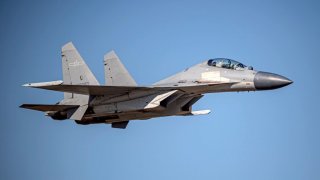 China is set to debut its new electronic attack jet this week at the upcoming Zhuhai Airshow.

Chinese state media outlet CCTV reported that a single model of the fighter, the J-16D, landed in Zhuhai on Tuesday in anticipation of the event, which will be held from September 28 to October 3.

The Shenyang J-16D is a dedicated electronic warfare variant of China’s J-16 strike fighter, itself an advanced development of the Su-27-derived late 1990’s J-11 air superiority fighter. The plane features an electronic warfare pod on each wing and its fuselage is lined with antennas. It is widely believed, though unconfirmed as of the time of writing, that the fighter carries an active electronically scanned radar array (AESA). The J-16D displayed at the airshow grounds is marked with the number “0109” under its wing, suggesting that it is the ninth unit of the plane’s first serial production run. The J-16D is the second jet of its kind, preceded only by the U.S. Navy’s EA-18G Growler. As with its Growler counterpart, the J-16 is designed to carry out radar-jamming missions against enemy systems and to provide electronic countermeasures (ECM) support for friendly aircraft. The J-16D also reportedly boasts an improved WS-10A engine, as well as a revised glass cockpit. The jet’s full weapons loadout remains unclear, with recent reports suggesting that, like the Growler, the J-16D could sport anti-radiation missiles to target enemy radar systems directly. The J-16D lacks the cannon 30mm cannon and infrared search and track (IRST) system of the baseline J-16 model.

“The J-16D shows that China attaches great importance to domination in electromagnetic warfare,” former People's Liberation Army (PLA) instructor Song Zhongping told the South China Morning Post. “To win future warfare, it will be necessary not only to dominate the air and sea but also to be proactive in domination of information and electromagnetic power.”

In an earlier address to the Air Force Association Air, Space and Cyber Conference in National Harbor, Maryland,  Secretary of the Air Force Frank Kendall warned that the PLA is relentlessly investing in electronic warfare capabilities as part of a sweeping effort to modernize and reinforce their kill chain. Chinese experts noted that the J-16D could figure prominently into a conflict with Taiwan, suppressing the island’s air defenses in the opening stages of a Chinese invasion of the island. “It is possible that both the J-16 and J-16D will be used in combat against Taiwan,” said Yuan Wang military science and technology institute Zhou Chenmming. The J-16D is likewise an addition to the growing constellation of Chinese anti-access, area-denial (A2/AD) capabilities in the Pacific, aimed at deterring, containing, and delaying nearby U.S. forces in the event of a Taiwan conflict scenario.

The J-16D is one of several modern People’s Liberation Army Air Force (PLAAF) platforms slated to make an appearance at the 2021 edition of the Zhuhai Airshow. The event will also feature the new WZ-7 reconnaissance drone and China’s flagship J-20 fifth-generation stealth fighter, as well as the H-6K strategic bomber.