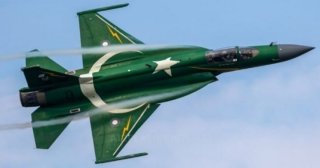 In 1989, the Chinese Chengdu Aerospace Corporation unveiled a major upgrade for its locally-made F-7 jet fighter, a licensed copy of the classic Soviet MiG-21 Fishbed. The new F-7 variant moved the engine air intake from the nose tip to the sides of the fuselage, making room in the nose for a more powerful radar.

Further enhanced with a new wing, a cutting-edge intake design and a new, more powerful engine, the JF-17 is Pakistan’s most important front-line fighter—and a remarkable extension of a basic plane design dating back to the 1950s.

In essence, the JF-17 is the ultimate MiG-21. In a sector increasingly dominated by American-made stealth fighters, European “canard” planes and variants of the Russian Su-27, the JF-17 is an outlier—a highly evolutionary plane that doesn’t try to be revolutionary.

After all, revolutionary is expensive.

The Soviet MiG corporation began work on the MiG-21 in the early 1950s, an era during which most air forces wanted very fast jet fighters, regardless of the design compromises necessary to achieve high speeds. With a theoretical top speed of Mach 2, the MiG-21 meets that expectation—and also boasts a simple, single-engine layout, good climb performance and decent maneuverability.

But the basic MiG-21 has its drawbacks. It’s difficult to control and its canopy provides poor visibility. It carries enough gas for barely an hour of combat flying. And its nose intake precludes the carriage of a large radar.

Still, MiG made thousands of Fishbeds for the USSR and client states. Several countries including China acquired licenses to build their own copies. Sixty years later, hundreds of MiG-21s remain in front-line use across Africa, Eastern Europe and Asia.

China’s F-7 is a much-improved MiG-21 with better pilot visibility, a locally-produced engine and some Western-made avionics. But the F-7 still suffers from a lack of space in the nose for a bigger and more powerful radar. Hence the 1989 proposal to move the air intake to the fuselage sides.

Pakistan had bought F-7s and, in the 1980s, hired the U.S. plane-maker Grumman to work alongside Chengdu in an effort to improve the fighters. But U.S. and European sanctions following China’s Tiananmen Square massacre ended the American-Chinese collaboration.

Pakistan, which also struggled with Western sanctions tied to Islamabad’s nuclear tests, took an interest in the modified F-7. Over a decade of work, the side-intake MiG-21 variant evolved into something much more sophisticated: the JF-17. Chinese, Pakistani and Russian engineers added a better wing—similar to the U.S. F-16’s wing—plus so-called “divertless” intakes that work equally well while the plane is flying fast or slow.

Russia provided the modern RD-93 engines for the JF-17. And most importantly, the new jet’s roomier nose is big enough for China’s KLJ-7 radar, able to detect and track targets on the ground and in the air.

Production began in China in 2006 and soon moved to a facility in Pakistan owned by the Pakistani air force, making the JF-17 the only jet fighter in the world actually manufactured by an air arm, rather than by a private corporation. Islamabad inaugurated the first Thunder squadron in 2010. And that same year, the new jets flew bombing missions targeting suspected terrorists in South Waziristan, part of Pakistan’s restive tribal area.

Clearly pleased, Islamabad ordered 160 JF-17s to form the backbone of its air force for the next 30 years. Around 100 are already in service.

Priced to move at an estimated $25 million per copy, the JF-17 is possibly the cheapest new-build fighter in the world today. By comparison, each of America’s F-35 stealth fighters costs around $200 million apiece at present—although the F-35 could get less expensive as development continues.

The JF-17 is not stealthy. But it does have roughly the same agility as an early-model F-16A, according to Pakistani pilots whom Piet Luijken interviewed for Combat Aircraft magazine. That means the JF-17 is probably a much better close-range dogfighter than the F-35 and many other current jets.

Plus, the Thunder can carry some shockingly dangerous weaponry. In November 2013, the Pakistanis took the JF-17 on tour in a bid to sell the plane to other air arms. Luijken caught up with the display team during their stopover in Dubai, where he spotted a CM-400AKG anti-ship missile under a JF-17’s wing.

The CM-400AKG flies up to 150 miles as fast as Mach 4. China designed the munition specifically to target American aircraft carriers, but it could prove equally devastating to other warships. Pakistan is the first export customer. In addition to the CM-400, the JF-17 can carry a wide array of air-to-air and air-to-surface weapons.

It might be a descendent of the 60-year-old MiG-21, but the JF-17 is a thoroughly modern warplane—and an affordable one. The same can’t always be said of the F-35 and other current fighters.