China's Marine Corps Is Getting Larger. Here's Why That Matters. 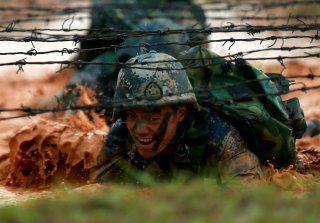 On last week's 70th anniversary of the People's Liberation Army Navy (PLAN), Beijing announced that it has created a new unit of Marines. This comes even as China has approved the reduction of its army by 300,000 soldiers. In many it now appears that the shift in military strength is simply moving from the People's Liberation Army (PLA) to the PLAN Marine Corps – which according to reports from the U.S. Naval Institute could grow some 400% from 20,000 marines to more than 100,000.

This is a major shift in Chinese strategic planning, and one that puts the focus on marine capabilities. Beijing as said this is to "protect arterial maritime trade routes and enforce its growing overseas interests."

The Naval Institute highlighted that what is meant by overseas interests could be quite vast and far-flung. In 2014, some 3,000 Chinese marines conducted cold-weather training in Inner Mongolia, the first time that the unit had taken part in training in the far north – and that was followed by training in Xinjiang for additional cold-weather training. The PLANMC also took part in Joint Sea I naval exercises with Russia in the Mediterranean in 2015, and this was followed by a 2016 Joint Sea exercises in the South China Sea, and in 2017 in the Baltic Sea.

Beijing has highlighted that the new units had conducted training on China's mountains and rivers, but was being transformed into a fighting force that could follow the PLAN's warships to train anywhere in the world. That is a major shift from the traditional training that typically takes part in the South China Sea.

This has signaled alarms in Taiwan, which noted that such a move could be to counter Taiwan independence.

China has been flexing its muscles with its new aircraft carrier – which earlier this month sailed past Taiwan. As the American USS Theodore Roosevelt (CVN-71) still remains in port in Guam, China's Liaoning has been on the only true aircraft carrier operating in the region.

Moreover, China is following the U.S. lead with its building of vessels similar to the U.S. Navy's amphibious assault ship. The PLAN is completing construction of its first Type 075 amphibious helicopter assault ship, which will be third in size after the U.S. Navy's Wasp-class (41,000 tons) and America-class (45,000 tons); and at 40,000 tons significantly larger than Japan's Izumo-class (26,000) or France's Mistral-class (21,000 tons). China is reportedly building three of these amphibious landing dock ships, and each will be able to carry up to 30 helicopters along with numerous amphibious tanks, armored vehicles, jet boats and hundreds of marine troops.

The flat flight deck could accommodate a vertical take-off and landing fighter such as the United States F-35B, but China currently does not have any such type of aircraft.

The South China Morning Post reported that the PLAN has described to the Marines Corps as one of its "five kids," and said "The eldest are submarines, second surface vessels, third air wings, fourth marines, and fifth coastal defence." Expanding and upgrading the PLAN MC has required not more specialized exercises and training, including systematic collaboration with the navy, but new and better equipment – which includes the Type 075, but could eventually require new aircraft and specialized armored vehicles.