China's Overseas Military Bases: Should We Be Worried? 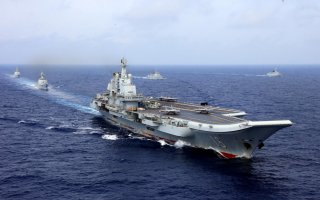 Congressional leaders are expressing concern about China’s creating of a military base in Djibouti, African as part of a broad pattern to expand military, economic and political influence on the African continent.

China just built its first overseas military base—in Djibouti, right on one of the world’s most important maritime routes. I saw it firsthand: China is trying to take control of more than forty ports in sub-Saharan Africa,” U.S. Sen. Jim Inhofe (R-Okla.), chairman of the Senate Armed Services Committee, said June 25 on the Senate floor.

According to US senior leaders and independent think-tank assessments, China’s fast-expanding military presence is designed to fortify substantial political and economic influence. This phenomenon, fast on the rise, is already undermining the US presence and greatly influencing political institutions and strategy across a wide array of US-allied African nations, senior officials say.

“Djibouti is a key, strategic United States partner in the region and is host to Camp Lemonnier, the sole enduring presence for the United State military in Africa since 2003. Djibouti remains committed to ensuring the pursuit of our shared interests in the region,” a State Dept. official told TNI in 2018.

The Djiboutian government is about $1.5 billion in debt to Beijing, former Commander of US AFRICOM General Thomas Waldhauser, told Congress as far back as 2018 before he retired. (Army Gen. Stephen J. Townsend is the current AFRICOM commander).

“We have strategic interest there, and the Chinese have built a base just outside our gate. So it is important that we are there, that we're present, and the African people see our commitment to their overall desires,” Waldhauser told the House Armed Services Committee this past March. “The African continent is a very interesting question because, first of all, there they are involved primarily all over the continent, for minerals, resources, and the like.

Increasingly, Chinese involvement is taking on a decidedly military direction; a 2017 report from the DoD-backed “African Center for Strategic Studies” not only raises concern about Chinese moves to acquire and exploit the countries’ natural resources but also reports that, in 2015, the Chinese were the second-largest arms provider to Africa behind only Russia.

Waldhauser articulated this to lawmakers as well, explaining that Chinese military operations in Djibouti do threaten US military activities.

“If the Chinese took over that port, the concern could be significant if there are restrictions on our ability to use it,” Waldhauser said. “Moreover, our U.S. Navy ships come in and out of there to refuel. There could be some consequences, that is why it is important to watch this,” he said.

The Africa-focused think tank further identifies the fast-growing scale of the Chinese involvement in Africa, which constitutes more than 80 percent of its $93 billion in annual crude oil, raw materials and natural resource imports from the region.

“In 2009, China surpassed the United States as Africa’s largest trading partner, and by 2015, China’s trade with Africa had reached $300 billion,” according to the African Center Strategic Studies’ “Pursuing the China Dream through Africa: Five Elements of China’s Africa Strategy,” essay reports.

Chinese African involvement is of great significance to the United States for a variety of pressing strategic issues. The roughly sixty-five hundred U.S. troops based in Africa train local allied forces, conduct a range of counterterrorism missions and seek to expand U.S. security amid instability, terrorism threats and potentially malicious foreign intrusions.

Much of the recent concern can be attributed to a gradual but profound shift in Chinese African strategy, as described in an essay from Nigeria’s Anambra State University.

China is making aggressive moves toward its own model of a certain blended or hybrid approach. These tactics undermine democracy with a movement toward centralized authoritarian rule in host countries and concurrently emphasizes market principles and economic growth.

As a result, the essay maintains that successful U.S. influence upon Africa during the Cold War years is systematically being eroded.

“They now seem to argue that their countries should reject the failed Western system with all of its demanding conditions and follow the freer Chinese developmental model, pursuing economic growth first and deferring the political reforms until later. This change of approach is beginning to undermine the West’s developmental efforts in Africa,” the essay, titled “Chinese Incursion and Impact in Africa,” states.

China’s Africa moves certainly align with its highly-visible and often-discussed expansionist strategy, involving a dramatic shift from operating as a dominant regional power—to working toward becoming a major international superpower.

“These moves are in line with the ‘New Historic Missions’ doctrine, which calls for an expeditionary capability that can, among other things, safeguard growing Chinese interests on the continent, maintain a naval presence in the western Indian Ocean, protect its merchant ships from piracy, and support China’s growing participation in UN missions in Africa,” the African Center for Strategic Studies maintains.

Kris Osborn is the new Defense Editor for the National Interest. Osborn previously served at the Pentagon as a Highly Qualified Expert with the Office of the Assistant Secretary of the Army—Acquisition, Logistics & Technology. Osborn has also worked as an anchor and on-air military specialist at national TV networks. He has appeared as a guest military expert on Fox News, MSNBC, The Military Channel, and The History Channel. He also has a Masters Degree in Comparative Literature from Columbia University