China's Type 08 Assault Vehicle: It Could Land Marines in the South China Sea 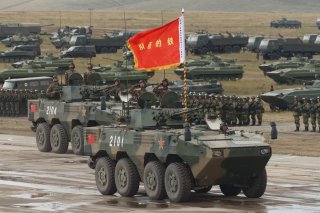 Imagine this scenario: You are one of the around 400 or so Taiwanese Marines and Coast Guardsmen on the stationed on the disputed Dongsha Islands, a small group of atolls, reefs, and banks in the South China Sea. Though the area is administered by Taiwan, it is also claimed by China—and Beijing means to bring the Islands into the fold.

Highly capable Chinese Type 05 fighting vehicles leave the well decks of assault ships near the horizon and quickly skim across the ocean surface towards the Taiwanese defenders. The highly mobile Type 05s are followed by the somewhat slower—but also amphibious—Type 08 amphibious vehicles. Mounting several different types of turrets with high-caliber guns and cannons, they can return fire beachside while swimming towards the speck of sand you’re entrenched in. And they’re filled with Chinese Marines who are armed to the teeth.

Type 08s can carry up to ten fully-equipped soldiers or Marines in their troop compartment, depending on the variant. As an infantry fighting vehicle, the Type 08’s typical mission profile would be to carry troops into battle who then dismount from a single, outward-swinging door from the rear. Once dismounted, the Type 08 would support ground infantry through fire with high-caliber guns, cannons, or anti-tank missiles.

In the South China Sea, Type 08s would provide a valuable ship-to-shore capability. Though not as fast in the water as their high-speed Type 05 cousins, the Type 08s could transport more troops onto austere beachheads and provide a “second wave” capability once an initial foothold onshore is established.

In the water, two propellers mounted on either side of the Type 08’s rear below the waterline propel the vehicle forward. Once on land, the Type 08s would benefit from their 8x8 powertrain, and significantly augment dismounted infantry’s firepower.

Quite a few of the Type 08s, perhaps most of them, have a single-barreled 30-millimeter gun mounted on a rotating turret, not unlike the upgraded Stryker family of American armored fighting vehicles, though the Strykers do not have an amphibious capability.

Some of the Type 08s also mount a 105-millimeter main gun likely capable of firing high-explosive, high-explosive anti-tank, and armor-piercing rounds. In this configuration, the Type 08 would operate more as an assault gun that could take on fortified beach positions like bunkers or pillboxes, as well as more lightly-armed vehicles. Depending on the penetration potential of smaller 105-millimeter armor-piercing sabot rounds, the Type 08 could potentially take on larger armored vehicles as well. Either way, the Type 08 would greatly enhance infantry firepower.

The Type 08 is perhaps one of China’s more potent ship-to-shore vehicles, especially in the role of troop transport. Though indeed more lightly armored than some of China’s other vehicles, the Type 08 would nevertheless be a tough nut to crack, even for entrenched defenders—be they Taiwanese Marines or Coast Guard personnel.