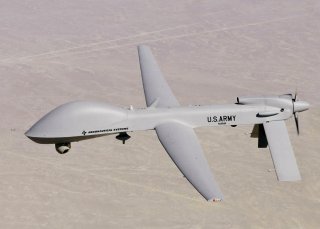 Upon announcing that a new drone has taken flight, the Chinese-government-backed Global Times newspaper reported that the new Wing Loong-1E drone will have more “range, endurance, efficiency and reliability” when compared with its predecessor.

The new Wing Loong-1E just made its maiden flight recently, a development which adds a new drone to China’s family of Wing Loong drones built by state-owned Aviation Industry Corporation of China.

“The Wing Loong-1E is still distinguishable as a Wing Loong-1 drone, but it made some changes to aerodynamic design, including adding upward-pointing winglets to the tip of the main wings like a Wing Loong-2,” the paper says.

In an apparent effort to lighten the weight of the drone and increase its speed and endurance, Chinese developers are making the new drone almost entirely by composite materials.

“By using composite materials for the entire aircraft, which is an advanced technology, the drone must be lighter and sturdier than the original Wing Loong-1, and it will likely enjoy longer range and endurance as well as higher efficiency and reliability,” the paper says.

Interestingly, the Global Times specifically cites the U.S. Army Gray Eagle as a point of comparison regarding some of the desired properties of the new PLA Air Force drone.

The Gray Eagle can perform a full range of missions to include aerial surveillance as well as armed attack; the drone operates electro-optical and infrared sensors, synthetic aperture radar, and four HELLFIRE missiles.

Unlike its predecessor, the Predator, the Gray Eagle relies upon a heavy fuel engine to offer increased horsepower and improved fuel efficiency.

In terms of its external configuration, the new Chinese drone does look a lot like an Army’s Gray Eagle, so it would make sense that the Chinese paper cited it. However, despite its outward appearance, there is little information on the kinds of high-fidelity sensors operating on the new Chinese drone. Are its cameras both Electro-Optical and Infrared? How long is their range and what kind of image fidelity or resolution do they generate? The answers to these questions likely inform the extent to which the new Chinese drone rivals or can compete with the U.S. Army’s Gray Eagle. Perhaps most of all, any margin of difference may reside in the kinds of computing and data processing built into the platform.

Kris Osborn is the Defense Editor for the National Interest. Osborn previously served at the Pentagon as a Highly Qualified Expert with the Office of the Assistant Secretary of the Army—Acquisition, Logistics & Technology. Osborn has also worked as an anchor and on-air military specialist at national TV networks. He has appeared as a guest military expert on Fox News, MSNBC, The Military.