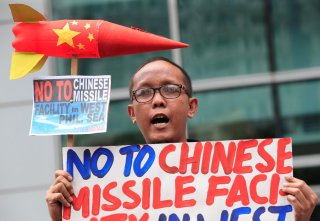 According to the Coast Guard’s report, a Chinese warship was spotted in the area. The Coast Guard intervened quickly, sending a “verbal challenge” to the warship and asking it to identify itself.

The Philippines is led by Rodrigo Duterte, who has repeatedly questioned security ties between the Philippines and the United States and made overtures to China. In February 2020, Duterte announced that the Visiting Forces Agreement (VFA) between the two nations, stationing U.S. troops in the Philippines, would be allowed to expire in six months. The VFA has since been renewed for six-month intervals each time its expiration is scheduled. In February 2021, the president backtracked, suggesting that the VFA could remain if the United States compensated the Philippines fairly.

While Duterte’s pro-China rhetoric has largely remained unchanged, the territorial dispute in the South China Sea between China and the Philippines has remained a serious issue between the two nations. Earlier in the year, hundreds of Chinese ships “swarmed” the disputed areas, eliciting a protest from the Philippines. Beijing has defended its actions as legitimate, arguing in part that the hundreds of vessels were simply “taking shelter from the wind”, according to Foreign Ministry spokesman Hua Chunying.

Polls have suggested that most Filipinos—both in government and in the public—view Beijing as a serious security threat. In an ISEAS-Yusof Ishak Institute report published in February 2021, eighty-seven percent of Filipinos regarded China as the main threat to Philippine sovereignty in the South China Sea.

The Spratly Islands are a frequent point of contention for the nations of Southeast Asia. China, Taiwan, the Philippines, Vietnam, Malaysia, and Brunei all claim part of the island chain. China’s claims, however, have caused the greatest tensions, as Beijing has artificially reclaimed land in the area and positioned military equipment on the land it controls.