A Class of Its Own: New U.S. Navy Submarine Will Be the World's Stealthiest 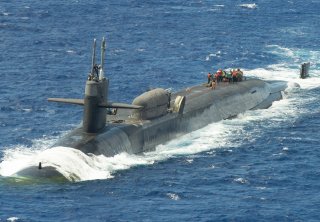 The Columbia-class will replace the U.S. Navy’s Cold War-era Ohio-class boomers — they’ll also be the quietest, deadliest submarines in existence.

The Columbia-class is the United States Navy’s newest class of submarines and will number twelve hulls in total. They will replace the U.S. Navy’s fourteen Ohio-class ballistic missile submarines that carry the sea-based component of the United States’ nuclear triad.

“With the Columbia-class program, the Navy has entrusted Electric Boat to deliver the next sixty years of nuclear deterrence for our nation, continuing the company’s legacy of delivering the finest, most technically advanced submarines in the world,” said Kevin Graney, president of General Dynamics Electric Boat in the company statement covering the ceremony.

“These submarines are critical for our national defense, and will embody the commitment to excellence our shipbuilders bring to their work each and every day.”

General Electric explained that initial Columbia-class designs “began in 2007 when the Navy approached Electric Boat to assist in the conceptual design of a replacement for the aging Ohio class, which entered service in the early 1980s. The Columbia class of 12 ships will carry 16 missiles each, which in total will represent approximately 70 percent of the country’s nuclear arsenal.” It added that “submarines are the stealthiest and most survivable of the nation’s nuclear triad of land, air and sea-based nuclear weapons.”

The USS District of Columbia will be the largest submarine ever in service with the United States Navy. It will also be the most capable, as “its reactor will not require refueling during the lifetime of planned service making the ship more cost-effective to operate and maximizing its time on deployment.”

And while it will carry a majority of the United States deployed nuclear arsenal, it will also retain the potent anti-ship and anti-submarine capabilities that other submarines have. “In addition to its complement of missiles, the submarine will be armed with Mk 48 torpedoes and will feature superior acoustic performance and state-of-the-art sensors to make it the most capable and quiet submarine ever built,” the company noted.

Though the USS District of Columbia is “scheduled for delivery in 2027 and expected to begin its first deployment in 2030,” the class “is expected to have a service life into the 2080s.” And, once in service, the Columbia-class will be the world’s stealthiest and most potent class of submarines the world has ever seen.