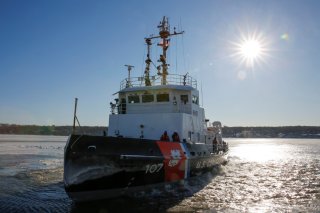 In comments given as part of the Navy League’s annual Sea, Air, and Space Symposium, the Commandant of the U.S. Coast Guard, Adm. Karl Schultz, explained the Arctic's future and its likely impact on the Russo-American relationship.

Reporters queried Admiral Schultz on his interactions with Russia in the Arctic, a region that is becoming increasingly important geostrategically as the world’s ice melts.

Schultz began by noting that due to the unjust acts in Ukraine by Russia, a planned meeting with the Arctic Council, an organization that Russia holds a chair in, has been put “on hold for very obvious reasons.”

However, the Commandant added that relationships with Russia and China vis-à-vis the Arctic—on things like “international fishing, U.N. sanctions against illegal fishing”—require pragmatism. Admiral Schultz added that the United States and Russia share a de facto maritime boundary line.

The Russian and American relationship still works “functionally” and “pragmatically,” Schultz explained, adding that it is going through a “stress period.”

“How does that play going forward—that’s something we have to think about. But in the Arctic … it’s inarguable, Russia has a lot of clear Arctic interests, and they’re deriving about a quarter of their GDP from the Arctic.”

The U.S. Coast Guard currently operates two icebreakers from the Cold War that are serving well beyond their planned service lives and need to be replaced. Russia, in contrast, has about a dozen icebreakers in service, around half of which are nuclear-powered.

“20 years down the road … are we looking at freedom-of-navigation operations potentially in the Arctic? And as we build out a fleet of a minimum of three Polar Security Cutters that are on a good budgetary trajectory, that needs to really be a conversation about six-plus heavy breakers. And we need to have a conversation about some medium capabilities.”

Commandant Schultz added that in the future, the Coast Guard needs “to be teamed up with … the Marines and the Navy.”

He added that as recent events have shown the “increasing geostrategic importance” of the Arctic, the United States needs to be thinking with more strategic clarity than ever before.