Coercive Politics: Iran’s Proxies in Iraq Were Never in Trouble 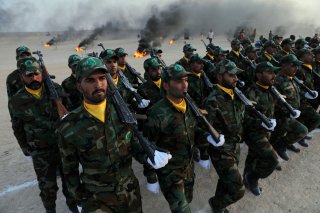 In late 2021, Iraqi politics took a decisive and hopeful turn. The October election was a disaster for some of Iraq’s most malign actors. Their defeat at the ballot box cleared the way for a majoritarian government, one with buy-in from parties across the country’s three major sects. This development was potentially historic for Iraq: for the first time, there would be an ethnically diverse majority government and, crucially, a minority opposition in parliament, the feature of nearly every other republican democracy in the world.

Today, Iraqi politics is dominated by a system that forces political actors to form broad coalition governments, a perhaps noble effort for inclusion in a country where power has historically been consolidated among smaller circles of ruthless individuals. But the resulting muhasasa system of governance is just as problematic, reducing accountability, incentivizing corruption, and paralyzing social progress. The government’s paralysis also leaves Iraq vulnerable to influence from foreign governments like Iran, whose extensive networks of militias and organized criminal enterprise have kept Iraqi politics in recurring cycles of violence and dysfunction.

The demise of the muhasasa system was only possible when its most malign enabler no longer existed. With the electoral defeat of the Iran-backed Fateh bloc, that finally looked possible. The electoral wing of Shia paramilitaries and the Popular Mobilization Forces (PMF), the militia network that controls much of the Iraqi economy and political system, had risen to prominence on the back of the counter-ISIS campaign, having played a significant role in its success. But with years of human rights abuses since then, highlighted especially during protests in 2019, Fateh’s popularity has waned. Fateh’s seat count was reduced to seventeen in 2021, down from forty-eight in 2018, and it dropped from the second-largest bloc of votes to the fifth-largest.

Complementing Fateh’s defeat was the success of Moqtada al-Sadr, the Shia cleric and public figure who in recent years stood as Fateh's greatest threat. Cutting into Fateh’s support with promises to fight corruption and rid Iraq of foreign influence, the Sadrist Movement won seventy-three seats in October, by far the most of any party. Moreover, Sadr had critical areas of support from other parts of Iraqi society, including the Kurdish Democratic Party (KDP) and the al-Siyada bloc, the largest Kurdish and Sunni parties in parliament, respectively. As 2021 came to a close, Sadr and his Tripartite Alliance were not only poised to reshape Iraqi politics but also pushing for the complete liquidation of the country's paramilitaries. His vision of an independent government constituted a decisive threat to both Fateh’s network in Iraq and its patrons in Tehran, who have effectively used its militias to pursue regional goals throughout the Levant.

But despite his broad coalition and decisive majority, Sadr’s vision has not materialized. Opposing the Tripartite Alliance has been the Coordination Framework, led by Fateh and former Prime Minister Nouri al-Maliki, another one of Sadr’s rivals. Sadr’s opponents have indeed become his political opposition, but as of now, they have not acquiesced to becoming the minority.

The Coordination Framework has managed to do this through a number of means, primarily its coercive power. With years of investments into the networks of militias, Iranian-backed paramilitaries under the PMF have been the Framework’s comparative advantage. Most experts agree that pitted against the power of Asa'ib Ahl al-Haq and the Badr Brigades, Sadr’s own militia, the Saraya al-Salam, is outgunned and overmatched. Throughout the winter and spring, PMF militias showcased their muscle, staging protests at government buildings and party headquarters. Those shows of force have been complemented by other instances of violence, including an assassination attempt against Prime Minister Mustapha al-Kadhimi in November, as well as targeted assassinations of prominent Sadrists across the country.

Coercion has continued against Sadr’s coalition allies as well. This spring saw targeted attacks against KDP-affiliated buildings and businesses in Baghdad and Kirkuk. Sunni party headquarters in Anbar and Baghdad have also been targets since January. Most notably, the Tripartite Alliance’s elected parliament speaker, Muhammed al-Halbousi, was the target of a rocket attack at his home in Anbar Province. Rocket attacks against the Kurdish energy sector have further roiled Kurdish politics, disrupting Sadr’s front against his Shia rivals. The country’s independent parties, currently at a record number due to the activist movements in 2019, have faced harassment and coercion too, just as they did during the 2019 protests. The likelihood that they are able to effectively resist Iran-backed forces is slim.

Yet, coercion has only been one piece of Fateh’s strategy. Its pact with Nouri al-Maliki, who has amazingly managed to salvage his political career after a disastrous tenure as prime minister, is chief among them. Allying themselves also with the Patriotic Union of Kurdistan (PUK), the KDP’s Kurdish rivals, the Coordination Framework has managed to form a powerful opposition in parliament, leveraging other parts of the Iraqi government, which has proved pivotal to its obstruction of Sadr’s goals.

Together with its allies in parliament, the Framework has found immense success in using Iraq’s formal political institutions to target Sadr’s allies. In February, Sadr’s choice for president, a government position reserved for the Kurds, was legally disqualified for allegations of corruption. With the help of the PUK and its officials in the current government, the Framework also managed to institute a quorum requirement of two-thirds—effectively blocking the formation of Sadr’s government entirely. As they obstructed the Alliance in parliament, Iraqi courts instituted legal rulings that threatened the cohesion of Sadr’s political coalition. Iraqi courts have issued rulings threatening the Kurdish government’s control of its oil industry, which many see as a retaliation against the KDP. In short, the Framework’s legal and parliamentary maneuvering has been devastating for Sadr.

The obstruction, paired with Sadr’s refusal to engage with Maliki, who continues to plan his return as prime minister, eventually forced Sadr’s hand. In June, Sadr announced that every member of his party would resign their parliamentary seats. The mass resignation was a surprise to many; ceding the seats meant giving them to the next largest vote-getter, primarily members of Fateh and Maliki’s State of Law party. By resigning, Sadr issued a direct challenge to the Coordination Framework to form its own government while he rallies his supporters and differentiates his movement from the consensus system Fateh and its allies are perpetuating.

Many see the Sadrists’ resignations as a gamble, a tremendously risky one at that. Moving from formal institutions of power to the realm where militias and coercive violence play an even greater role—at a time when the protest space is more fractured than in 2019—puts what is left of Sadr’s national vision in a precarious position. Fateh and Maliki are unlikely to face challenges similar to those they presented to Sadr. Their attempt to form Iraq’s latest government continues as they court the remnants of Sadr’s Tripartite coalition.

To be certain, Iranian-backed parties are in a much stronger position today than they were immediately after the election. Still, the raw power of Iran-aligned groups like Fateh never truly waned. Parliamentary seat counts are just one piece of Iraqi politics. In reality, the paramilitaries and illicit finance networks that Iran leverages so successfully to coerce its rivals have played a larger role in Fateh’s survival than any representation in parliament has. And while Fateh’s status in parliament may have been in question, its survival in Iraqi politics more broadly has never meaningfully been in doubt.

Christopher, or Kit, Wheeldon is a graduate of the London School of Oriental and African Studies where he studied Middle East politics. Follow him on Twitter @kitwheeldon.