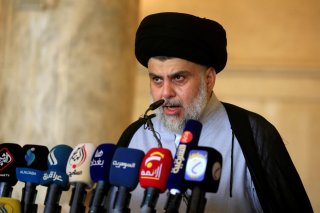 Seventy-three new lawmakers were sworn into Iraq’s parliament on Thursday, replacing the members of the Sadrist Movement who resigned en masse two weeks ago to break Iraq’s eight-month political deadlock and pave the way for a new government. Sadr’s move removed his party—the largest in parliament following Iraq’s October 2021 elections—from politics, paving the way for each of the lawmakers who had come second in the election to Sadr’s MPs in each race to replace them in parliament. The MPs replacing the departing Sadrists are mostly members of the Coordination Framework, an alliance of pro-Iran parties; the bloc now has 122 seats, a decisive majority, and one theoretically large enough to establish a new government.

Muhammad Saadoun Sayhod, a member of the Shia Rule of Law coalition, announced on Thursday that the “first step has been completed, which is the replacement deputies taking the oath [of office].”

“We will now start the process of electing the president and naming the prime minister from the Coordination Framework,” Sayhod added, voicing optimism about the probability of the new government’s imminent formation.

According to the Iraqi constitution, each new parliamentary session is responsible for electing a president, who is then responsible for choosing the prime minister. Crucially, a president must be selected with a two-thirds supermajority in parliament, meaning that smaller factions can disrupt the selection process. Prior to the Sadr bloc’s resignation, it had been engaged in negotiations to establish a government for more than half a year, far exceeding the nominal thirty-day limit.

Iraq’s Shia Muslim majority has been divided between parties that favor Iran, allied in the Coordination Framework, and Iraqi nationalist parties that oppose Tehran’s regional goals, including the Sadrist Movement. Iraq’s Sunni Muslims and Kurds each have their own political parties with their own objectives, complicating the path to a two-thirds majority in the parliament. During his time in power, Sadr and his parliamentary allies had favored the election of Rebar Ahmed, the interior minister of Iraq’s Kurdistan autonomous region, to the presidency, but other lawmakers favored the re-election of current president Barham Salih, creating the impasse that ended with the Sadr bloc’s resignation and the new lawmakers’ accession to parliament.

It is not yet who the Coordination Framework will choose to lead Iraq. Once the president and prime minister are selected, the prime minister is responsible for appointing his cabinet—and the composition of its members could be an early clue about the pro-Iran bloc’s governing style. While Sadr’s deputies are no longer in parliament, the cleric-turned-politician maintains an active following among the Iraqi public and could apply pressure on the parliament to change its policies by arranging demonstrations or other disruptive measures.