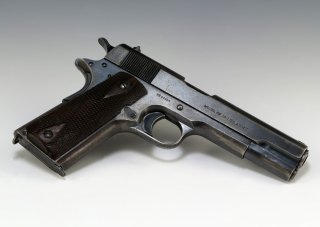 John Browning, arguably one of the United States’ most iconic and talented weapon designers, designed what would become one of the most widely-produced, copied, and recognizable pistols in history, now known today as the M1911.

Though the M1911 made its combat debut during World War I, the design really came into its own during World War II. During that conflict, the design’s worth was solidified—millions of M1911s were produced for not only the United States but for other allied countries as well.

Post-war, the United States relied on the M1911 design during the Korean war and during Vietnam, though by the 1980s, the design was beginning to show its age. A replacement was found in Beretta’s M9 pistol, chambered in the smaller 9x19-millimeter Parabellum.

Despite the widespread adoption of Beretta’s small, higher-capacity pistol, the M1911 remained a mainstay in the Marine Corps among certain specialized groups like some reconnaissance units as well as among some MEU(SOC) personnel.

And, despite the wide-spread adoption of tens of thousands of Beretta M9 pistols, the United States Special Operations Command felt the need for a pistol that retained the stopping power of the large .45 ACP cartridge, while updating the M1911 platform.

To that end, USSOCOM initiated the Offensive Handgun Weapon System competition in order to find a suitable, .45 ACP replacement service pistol. Though Colt had high hopes for their own M1911-replacement, the Colt Colt OHWS, the design was ultimately unsuccessful. The German Heckler & Koch ultimately won the competition with their MK23 Mod 0 pistol. The MK23 Mod 0 was intended to be an offensive weapon, rather than as a back-up, secondary weapon like the M9 and remains in service with some Special Operations Command soldiers.

Despite the retention of updated and modified M1911, the Colt M45A1, by the Marine Corps, the M1911 and derivative designs are on the out, with the United States military shifting from lower capacity, harder-hitting ammunition, to increased capacity designs with less stopping power. Most recently, the Army, Air Force, Navy, and Marine Corps adapted the M17 and M18 service pistols, chambered in 9x19mm Parabellum as their standard-issue service pistols.

And, despite no longer enjoying the widespread success that it once did as the United States’ standard-issue service pistol, the iconic M1911 design is still manufactured by Colt, as well as by a number of other firearm manufacturers in the United States and elsewhere abroad—not too bad for a pistol originally designed at the beginning of the last century.