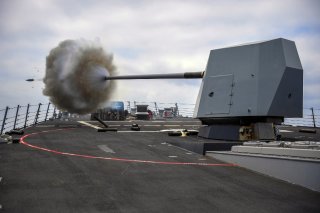 The Navy’s ongoing design work on its DDG(X) next-generation destroyer is benefitting from developmental strategies employed in the Virginia and Columbia-class submarines.

Both of these large submarine acquisition programs continue to receive widespread praise for their developmental successes, and the service is making a specific effort to incorporate lessons learned into future programs. “Columbia has gotten a lot of press recently in the last several years about a thing called the IPPD [Integrated Process and Project Development] process, and how successful that is, and there's a lot of interest in that we are very much examining that. And figuring out what parts of that is smart for us to do the DDG(X) program,” Katie Connelly, the deputy program manager for the DDG(X) program office, told an audience at the 2022 Surface Navy Association Symposium.

A big part of the strategy involves ongoing design work intended to refine concepts and move toward a new hull form.

“We are currently in concept formulation, and we plan to enter preliminary design when appropriate. The CNO [Chief of Naval Operations] top level requirements were approved in December 2020 and formed the DDG. Our acquisition strategy is still under development,” Connelly said.

Connelly explained that a large part of the strategy to incorporate successes from the Columbia program includes a specific effort to get industry involved early in the developmental process. The Columbia submarines, for example, benefited from years of industry-Navy science, technology, and research work to explore the realm of the possible, discover new ideas and work on integrating them into a new platform. “One of the key things that we're finding from that is that upfront and early engagement of industry helps us inform our design decisions and design process, and by doing that, will enable us to build a design platform that is both producible and also affordable in the future,” Connelly said.

Columbia-class subs are now being built, but early science and technology work exploring unprecedented technologies began nearly ten years ago. This may be part of the reason why the Columbia-class submarines incorporate so many innovations, including quieting technologies, an electric drive system, and an x-shaped stern. All of this work continues to inspire the DDG(X) program.

“As we move through the design process. We're being informed by the IPPD process from Columbia, and other programs and lessons learned. And then for the actual ship production, we are trying to be very thoughtful on the transition from the 51 production lines to the DDG(X) production lines,”  Connelly said.