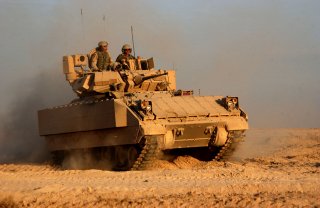 Christmas may be coming, but so too is the U.S. Army's final request for proposals (RFP) for its Optionally Manned Fighting Vehicle (OMFV) program, which is set to replace the aging M2 Bradley Infantry Fighting Vehicle.

Introduced in 1981, the Bradley has been widely regarded as reaching the end of its technological capabilities. The Army held a virtual industry day on December 9 and the RFP is expected on or about December 18.

Brig. Gen. Ross Coffman, director of the Next Generation Combat Vehicles Cross-Functional Team, said the proposals will include asking for concept designs. Up to five companies will be awarded contracts in June 2021 to work on the concepts, with a detailed design expected from each by early 2023.

“We want the best in the hands of our Soldiers, because when our nation calls, our women and men will stand ready,” Coffman said in a statement last month. “As long as we give them the right orders, the right mission and the right equipment, they will, as they always have been, be successful.”

The Army has asked for concept designs of the OMFV that could transform the way infantry soldiers and maneuver formations fight on the battlefield. The U.S. Army plans to field the OMFV to both active and National Guard armored brigade combat teams beginning in fiscal year 2028 (FY28). Approximately $4.6 billion has been invested in the program from FY20 to FY26.

An earlier effort to seek a prototype from at least two competing companies was delayed after only General Dynamics Land Systems submitted a bid. According to DefenseNews, the Army's first attempt had laid out threshold requirements on a timeline that many did not see as feasible. Even BAE Systems, which manufactures the Bradley, opted not to enter.

The Army then restarted the program in January of this year with a different competitive plan that offered more flexibility. As a result, several contractors including General Dynamics, BAE Systems, and Germany's Rheinmetall have expressed interest.

“As we enter Phase 2, the Concept Design phase, for OMFV, inclusive feedback and innovative thinking from industry remains key,” Brig. Gen. Glenn Dean, the new program executive officer for Ground Combat Systems, said in the Army statement. “We received tremendous feedback from Industry on the draft RFP released in July, and we have made significant changes as a result of that feedback.”

Survivability is the Top Priority

In future conflicts, the OMFV must be able to face tanks, helicopters, artillery, and other fighting vehicles.

Survivability has been placed as the vehicle's top priority.

“We will fight outnumbered and we must possess the technology that allows us to do that,” Coffman suggested. “It needs to be able to defeat those capabilities. We cannot modernize to parity. We must modernize for overmatch and that's got to be our focus. Anything less than that is unacceptable.”

Coffman added that technology could help transform the way the Army fights, and other characteristics of the OMFV should include are mobility, growth, lethality, weight, logistics, transportability, manning, and training. Granularity will be added to some of those characteristics in the request.

It will be a multiple phased process.

After the concept design phase, the Army will reportedly move into the detailed design phase. Work will be executed in FY23/FY24, before the prototyping will begin the following year in FY25. Vehicle testing will begin in FY26 and wrap up in FY27, with a production decision planned for the end of that year. Full-rate production would then be expected by the second quarter of FY30.

The Bradley was developed in the 1960s to replace the M1113 Armored Personnel Carrier (APC), and from the beginning, the program wasn't without controversy. While it has been in service for nearly forty years it could be fairly described as a fighting platform no one wanted or really needed. Despite that fact, some 2,200 Bradley vehicles were deployed during Operation Desert Storm, where only three were lost to enemy fire and it actually outperformed the M1 Abrams tanks and destroyed more Iraqi armored vehicles.