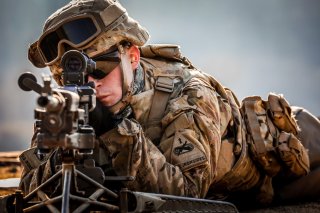 The precision, range, and lethality of an Army rifle are often the deciding factors in the outcome of any dismounted firefight between dug-in infantry and invading ground forces. The ability to maneuver, target, and fire in close quarters, urban situations, or rugged natural terrain can shut down an enemy’s advance should defenders effectively execute with dispersed and highly precise fire.

This equation and the many variables involved have inspired the U.S. Army to focus on its upcoming decision on which Next Generation Squad Weapon (NGSW) offering will replace the Army’s current M4 Carbine and M249 Squad Automatic Weapon. The service is now weighing the merits, attributes, and potential limitations of two distinct industry offerings, one from Sig Sauer and another from a Beretta USA-LoneStar Weapons Systems team.

The new weapon will likely be mass-produced and put in service for decades as an upgradeable system for use by infantry forces closing in on an enemy or defending attacks.

LoneStar and Beretta have partnered to architect a gas and recoil-operated, magazine-fed automatic rifle. The weapon is impulse averaged and air-cooled to optimize combat performance, and it is designed for short-recoil and automatic fire. Along with short recoil, the weapon is engineered to enable controllable, accurate automatic fire essential for meeting evolving threats, developers say. Other attributes of the weapon include dual-firing modes, with a closed bolt in semi-automatic mode. Beretta statements also refer to a flash-minimizing, sound-reducing suppressor intended to reduce the signature of the weapon and soldier on the battlefield. Beretta also contributed to the weapon's development earlier in the process by building components for a second round of NGSW prototyping and collaboration. At this stage, Beretta’s work also included a number of analyses, numerical assessments, and various kinds of simulations.

The concept for the NGSW emerged following the 2017 U.S. Army Small Arms Ammunition Configuration study. Among other priorities, the study called for advanced fire-control technology and bullets designed to “not only defeat threat capabilities but also ensure overmatch.”

For the NGSW, the Beretta and LoneStar team has been testing and developing a bullpup design, with Beretta also taking a leading role in developing a variant of its RM277 for sale to U.S. allies as well as a semi-automatic variant for civilian sale in the U.S. commercial market. Capable of stable and accurate automatic fire, long-range effectiveness, and reduced recoil, the RM277 weapon is engineered to offer maximum lethality in a compact, lightweight package.

The weapon’s bullpup design—with the magazine located behind the trigger—also brings the benefits of a relatively long barrel length, higher muzzle velocities, and increased range, developers and observers point out. The design is intended to engineer a compact, more maneuverable weapon while preserving a highly effective longer barrel design.

Army weapons developers have been careful to reference each individual vendor in public statements. Along with comments about Textron and Sig Sauer, Maj. Wyatt Ottmar, project manager of Army Futures Command’s Soldier Lethality Cross-Functional Team, noted the LoneStar offering “incorporates a bullpup design that places the magazine behind the cartridge and the pistol grip which allows for a longer barrel while minimizing the total length of the weapon,” according to an Army video on the NGSW.