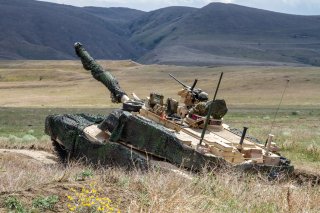 In the face of Russian threats, several prominent members of Congress are asking the Defense Department to fast-track the sale and delivery of 250 Abrams tanks to Poland to reinforce “NATO’s Eastern flank.”

“Expediting the provision of this capability, especially as Russia builds-up forces around Ukraine, would send an important message to both NATO and the Kremlin,” the letter states.

Positioned to Ukraine’s west, Poland could reinforce Ukrainian defenses or signal resolve to help increase NATO’s deterrence posture. But the move to send Abrams tanks may largely be symbolic in some respect, as the Global Firepower military rankings say Russia operates as many as 12,000 tanks. However, the sheer volume of tanks matters less than the range and resolution of tank sensors and the precision of tank weapons. A numerically inferior tank force could prevail against superior numbers of tanks should they have precise, accurate, and long-range thermal sights and sensors. In that case, a small number of tanks could target and destroy a larger adversarial force at standoff ranges without being detected. This occurred during the Gulf War’s tank battles, during which Abrams tanks destroyed large numbers of Iraqi T-72s.

In this respect, analysts must consider how many of Russia’s 12,000 tanks have been modernized such that they could rival or compete with the United States’ upgraded M1A2 Abrams tanks that are operating in Poland. How many Russian tanks are upgraded T-72 or T-90s, and what kind of range and resolution do their sensors have? Answering this question may well determine who prevails in a Polish-NATO-Russian tank battle. Beyond the advantage of bolstering deterrence efforts, getting Abrams tanks to Eastern Europe on a faster time frame makes a lot of sense for NATO’s overall strategic posture and forward footprint.

“Helping to equip Poland with the M1A2 tank would serve to displace Soviet-era equipment in the Polish force structure, and thus enhance interoperability with U.S. and NATO forces, while simultaneously strengthening the U.S. industrial base,” the letter says.