The Coronavirus Pandemic Is Like Nuclear War, Expert Says 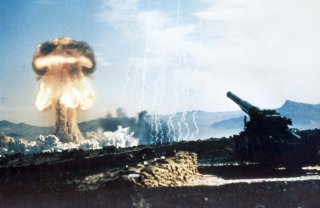 The coronavirus pandemic has a lot in common with an atomic attack. The effects of the virus, and the United States’s dysfunctional nationwide response to the same, are like a “nuclear war in slow motion,” according to Jeffrey Lewis, an arms-control expert at the Middlebury Institute of International Studies in California.

Noting that confluence, Bulletin of the Atomic Scientists interviewed Lewis to understand just how pandemic and nuclear war, and the U.S. government’s role in each, can overlap -- and just what we might learn from that.

Kim, convinced he's being targeted for assassination, steels himself for a desperate war of survival. An inattentive, irritable Trump, distracted by a delayed golf game, tweets a personal insult directed at Kim's sister.

For Kim, the tweet is the final straw. He triggers Pyongyang’s nukes.

“A lot of people complain that the book is a cheap shot at Trump, but in fact, I think it’s accurate to say that he’s very immersed in his own feelings all the time,” Lewis told Bulletin writer John Krzyzaniak. “He’s not making any effort to play the role of president in the sense of being concerned about how his words and actions will be interpreted by others.”

Trump “is emoting because of how it makes him feel in the moment,” Lewis added. “And so the way in which his tweets and comments have tanked the stock market and generally sown panic and confusion, that’s precisely what he does in the book. It’s kind of a minor detail whether the enormous numbers of casualties are from a nuclear war or from a pandemic, it’s the same fundamental dysfunction.”

Krzyzaniak noted that U.S. states have responded to the pandemic in more focused and effective ways than Trump’s administration has done. “State and local officials are acting on their own to mitigate things in a way that they might not be able to do during a nuclear crisis,” Krzyzaniak said. “Does that help?”

“No, I think the lack of adequate testing capacity has forced localities to step in,” Lewis answered. “But unfortunately, I don’t think states and localities have the tools that they need to really combat this effectively. I don’t want to be critical of them because they’re trying to do the best they can. But there’s a reason we have a federal government. The federal government has responsibilities and it is failing abjectly at them.”

“Not to dwell too much on the book, but that’s the central warning of the novel, that the government has really important responsibilities,” Lewis added. “And if you have people who are not competent in their positions, or who are not interested in doing that particular job, and if you have this kind of leader in this situation, things get out of hand much more quickly than you realize.”

Read the whole interview here. Lewis’s novel is available wherever books are sold.