This Could Be How Turkey Attacks Greece in 2023 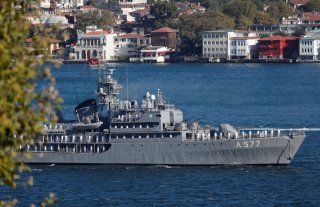 Turkey’s President Recep Tayyip Erdogan is no fool. He understands the deep trouble in which he finds himself. His interest rate gamble failed; Turkey is nearly bankrupt. Inflation approaches 100 percent and Turkey’s currency is in freefall. Turks are unhappy. Meanwhile, elections loom. For years, such elections did not matter. Turkey’s opposition leaders are lazy, uncharismatic, or in prison. Erdogan controlled the media and mechanisms enough that he could push things his way without too many questions, at least from inside Turkey.

That changed in 2019. The opposition Republican People’s Party narrowly won municipal elections in Istanbul and Ankara. The results shocked Erdogan who ordered a do-over in Istanbul. Three months later, opposition candidate Ekrem Imamoglu increased his margin of victory to almost 10 percent, a result too great for even Erdogan’s machine to paper over. Pushed down and abused, Turks had had enough. As Turkey approaches both its symbolically important centenary next year and heads to parliamentary and presidential elections, Erdogan is worried. He knows under normal circumstances, he cannot win.

Erdogan is no democrat. He cynically once liked democracy to a streetcar: he would ride it as far as he could and then step off. There are limits to his power, however. He needs an excuse either to postpone elections or to distract Turks with nationalism. A conflict with Greece checks both boxes.

Erdogan is not stupid, though. After Vladimir Putin bogged down in Ukraine, he must question Turkey’s readiness. After all, after the 2016 “Reichstag Fire” coup, Erdogan purged the military. Turkish special forces might fight Armenians in Nagorno-Karabakh or attack Kurds and Yezidis in Syria and Iraq with drones and F-16 fighters but combat against a near-peer NATO member is a different issue entirely. Greece’s military might be only one-quarter the size of Turkey’s, but moral is higher, and the Greeks not spread as thin.

So how might Turkey precipitate the crisis? Erdogan will likely take a page from China’s playbook. The People’s Liberation Army has seized many rocks, reefs, and “features” in the South China Sea. It has not only transformed them into military bases, but has also used their possession to fortify Beijing’s illicit claims to extend its exclusive economic zone over 90 percent of the South China Sea’s waters. China has acted both slowly and deliberated with a so-called salami-slicing strategy, digesting pieces but never biting off so much in one go that it provoked neighbors or the United States to the point of war.

Erdogan and his defense minister, Hulusi Akar, increasingly dispute Greek sovereignty over islands in the Aegean Sea, in effect seeking to rewrite and reinterpret the 1923 Treaty of Lausanne and subsequent conventions and agreements. It is in the Aegean that Erdogan will likely make his move, arguing that they are Turkish and do not belong to Greece.

Turkish jets previously harassed residents of Kastellorizo, just a mile and a half off Turkey’s coast, but seeking to occupy an island with nearly 500 Greek residents would force a shooting war Erdogan hopes to avoid.

In an interview, Constantinos Filis, director of the Institute of Global Affairs, pointed out that, in recent months, Turkey has instead overflown Agathonisi, Farmakonisi, Kandeliousa, and Kinaros. The Turks utilize both manned fighter jets and drones in their overflights, usually probing the islands between three and five in the morning. Each is small. Agathonisi, the northernmost island of the Dodecanese, lies just eight miles off the Turkish coast and is home to fewer than 200 Greeks. The community of Farmakonisi, just under 14 miles to the south, is even smaller. A decade ago, it was home to just ten residents.

While Kandelioussa is uninhabited, it is strategic and part of the Nisyros municipality, which has approximately 1,000 residents. Because Kandelioussa is further west than many other Greek islands, a Turkish outpost would effectively leapfrog over Greek islands to the east, tightening a noose around them and enabling Turkey to blockade. Kinaros, also uninhabited, is still farther West, the second most western Dodecanese island after Astypalea.

Erdogan may land marines or special forces on the island and then dare Greece to remove them. That diplomatic crisis could reinvigorate Erdogan’s religious base and Turkish nationalists. Erdogan could simultaneously insist that any criticism of him or his record was treasonous. Should the crisis lead to a military skirmish, Erdogan could declare a state of emergency and cancel elections entirely.

Erdogan may also count on U.S. and European “bothsideism.” The State Department, for example, has chastised both sides for overflights even though Turkey is overflying Greek territory and not the reverse. If Turkey creates a fait accompli, Erdogan may hope that the United States, Europe, and the United Nations will allow him to bog down Greece in insincere negotiations while he establishes facts on the ground. Here, Turkey’s Cyprus playbook comes to mind.

Too often, the United States and NATO allow themselves to be distracted, a tendency from which other aggressors seek advantage. It is essential that both Washington and Brussels be proactive: Any Turkish move on Greek islands will trigger a military response against the Turkish contingents on those islands that would humiliate Erdogan and hasten his downfall, elections or not. Erdogan may want to be embraced as a sultan and remembered as more consequential than Ataturk, but he must understand today that if he pursues this course of action, his legacy will be that of Argentine dictator Leopoldo Galtieri who fell from power and was imprisoned after failing to seize the Falkland Islands.