Could European & US F-35s Save the Baltics from a Russian Invasion? 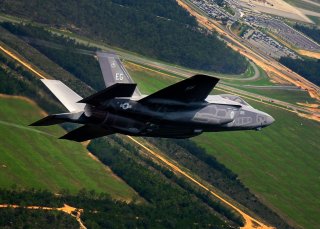 A quick look at a map of the Baltic Sea raises new possibilities for U.S. and NATO allied Air Forces in Northern Europe. It's all thanks to the rapid arrival of new Lockheed Martin F-35 stealth fighter jets.

All of these events, unfolding over just this past year, paint a new picture when it comes to any ability to deter or destroy Russian forces from the Baltic Sea. This concentration of F-35 power in Northern Europe introduces the possibility that the United States and its allies could, if necessary, quickly launch a massive fifth-generation air assault into Russian airspace instantly should that become necessary. Not only does Finland share a border with Russia, but the Russian coastline and the Baltic states border the Baltic Sea as well. This places Russia easily within the combat attack radius of F-35s from Poland, Finland, Norway, Denmark, the Netherlands and possibly even the UK. This tactical reality, greatly enhanced by the F-35's multi-national Multifunction Advanced Data Link connecting all F-35s, does not even take ocean launched F-35s into account. U.S. and allied amphibious assault craft or even aircraft carriers could also launch F-35s from areas in the Baltic Sea as well. This possibility may have been part of the thinking this past year when U.S. and UK F-35s conducted nearly 1,300 sorties together to improve readiness, interoperability, and warfare preparations. As part of this exercise, the UK Royal Navy’s HMS Queen Elizabeth launched F-35Bs from both the US Marine Corps and Royal Air Force.

“Nine nations have F-35s operating from a base on their home soil, 12 services have declared Initial Operational Capability and six services have employed F-35s in combat,” a statement from Lockheed Martin on F-35 activities in 2021 said.

The rapid arrival of new F-35s has brought new dynamics to play, which have been documented in a widely read and quoted 2016 Rand Corporation study called “Reinforcing Deterrence on NATO’s Eastern Flank, Wargaming the Defense of the Baltics.” The published report, emerging from extensive wargaming, made the determination that the Baltic states would be quickly overrun by Russian forces in the event of any invasion. The study recommends that the Pentagon substantially reinforce its combat presence and forward-deployment activities in the region.

“The games' findings are unambiguous: As presently postured, NATO cannot successfully defend the territory of its most exposed members. Fortunately, it will not require Herculean effort to avoid such a failure. Further gaming indicates that a force of about seven brigades, including three heavy armored brigades—adequately supported by airpower, land-based fires, and other enablers on the ground and ready to fight at the onset of hostilities—could suffice to prevent the rapid overrun of the Baltic states,” the study’s abstract states.

However, what about considering this 2016 assessment in a 2022 context? In 2016, there were not as many F-35s operating in Northern Europe as there are today, by large margins. Would the proximity, access, and lethality of a nearby multi-national F-35 force change this equation? The quick answer: absolutely. Russia does not operate as many of its own Su-57 5th-generation aircraft, which may not even compare to F-35s in terms of performance. Consequently, a dispersed, networked force of U.S. and European F-35 launched from the air and sea would be very well positioned to slow down, stop or even destroy a Russian ground invasion of the Baltics by quickly establishing air superiority. The strategic circumstance when it comes to deterring or destroying any kind of Russian attack across Eastern Europe has been changed in a profound and measurable way given the amount of arriving F-35s.