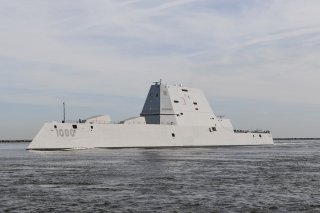 One of the U.S. Navy’s newest ships is set to receive a missile upgrade from the Department of Defense.

Huntington Ingalls Industries, an American shipyard, will install long-range hypersonic missiles aboard the USS Zumwalt and USS Michael Monsoor, the lead ships of the Zumwalt-class, a small class of advanced but hobbled guided-missile destroyers.

A notice from Naval Sea Systems Command explained the decision.

“Use of an alternative source, other than HII, would result in unacceptable ship and program schedule delays and would produce adverse impacts to the DDG 1000/1001 operational requirements,” it added.

The exact information on when the installation will be complete is unclear but it is thought to be planned for 2023.

As initially designed, the Zumwalt-class was to have a pair of 155mm naval bombardment guns, dubbed the Advanced Gun System, installed on the forward section of the deck. The guns fold into a stealthy housing, which preserves the ship’s unique tumbledown hull shape and makes the vessels difficult for enemy radar to pick up.

The Advanced Gun System’s demise lies with its ammunition, the Long Range Land Attack Projectile, which was prohibitively expensive. Each shell cost approximately $1,000,000 which was so expensive that no ammunition was actually made for the 155mm guns.

The hypersonic missile, the Common Hypersonic Glide Body (C-HGB), is a cross-service weapon and will be in service with the U.S. Navy, Army, and Air Force.

The exact number of Common Hypersonic Glide Body missiles installed on the ships is not known, but if the U.S. Navy does opt for the Multiple All-up-round Canisters (MAC), a housing system seen on some submarines, multiple missiles could theoretically be placed inside a single missile tube.

While the Zumwalt class' original role as an infantry support and naval bombardment ship has proven to be a total bust, the combination of a stealthy platform and advanced hypersonic missile could significantly aid the United States Navy.