Could The IWI DAN .338 Sniper Rifle Be The Best Weapon Israel Ever Made? 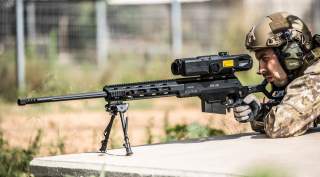 Key point: It remains to be seen if the DAN can replicate even a fraction of the massive export success of the Galil and Tavor, but IWI is confident in their ability to carve out a niche in the sniper rifle market.

Israeli Weapon Industries (IWI) is best known as the creator of the Uzi, a compact submachine gun that went on to become a global export hit in the 1960’s. IWI’s other notable products include the Galil and Tavor, both of which have become formidable export contenders in their own right.

Following its privatization in 2005, IWI has sought to diversify beyond its current crop of submachine guns, pistols, and assault rifles. Most recently, IWI has staked a claim on the increasingly lucrative military sniper rifle market with the IWI DAN .338, a precision tactical rifle designed in conjunction with the Israeli Defense Forces (IDF)-- here is what it can do.

The DAN checks all the basic features boxes expected of modern sniper rifles: sub-MOA accuracy, collapsible stock, adjustable bipod and monopod, and chambering in the .338 Lapua Magnum cartridge. Though relatively new, the .338 has rapidly gained in popularity as an anti-personnel round that sacrifices the sheer stopping power and anti-materiel potential of the competing .50 BMG in favor of more manageable recoil and potentially better handling depending on the rifle in question

Nevertheless, IWI has a few design tricks up its sleeve to help its first sniper rifle stand out from the competition. First, the DAN is relatively modular for a rifle in its performance class. Its fluted, 28-inch cold hammer-forged barrel is advertised as being rapidly interchangeable without the use of special tools, and the included MIL-STD 1913 picatinny rail can be mounted in a variety of forms to accommodate a wide range of optics setups.

The DAN strives for the kind of attention to small detail that separates good from great design. A bolt lock signals when the 10-round, drop-free magazine is empty. The stock is adjustable as well as collapsible and sports a skeletonized frame to help the DAN maintain its competitive weight of 15.2 pounds. An ambidextrous safety is conveniently located near the two-stage adjustable trigger, which gives the operator a degree of control over pull weight distribution; as with many of the components on the DAN’s aluminum alloy chassis, the trigger is removable. The DAN comes with an included bipod and monopod.

But how does the DAN perform? IWI claims “incomparable” accuracy at an effective firing range of 1200 meters. Having only been introduced in 2014, the DAN has yet to be widely procured by militaries and law enforcement agencies around the world. Although designed in collaboration with special forces units of the IDF, it is unclear as of the time of writing if the DAN is being used by any branch of the IDF or Israeli law enforcement. However, the DAN can claim at least one high-profile operator: the British Special Air Service (SAS), which is on record as having used the Israeli rifle during the Syrian Civil War to kill an ISIS commander in 2016.

It remains to be seen if the DAN can replicate even a fraction of the massive export success of the Galil and Tavor, but IWI is confident in their ability to carve out a niche in the sniper rifle market; in fact, they’re just getting started. According to IWI Director Uri Amit, the DAN is only the “first of a family of sniper rifles that are currently in various stages of development."

Mark Episkopos is a frequent contributor to The National Interest and serves as research assistant at the Center for the National Interest. Mark is also a PhD student in History at American University. This article first appeared last month.