Could President Trump Tweet Out the Nuclear Launch Codes? 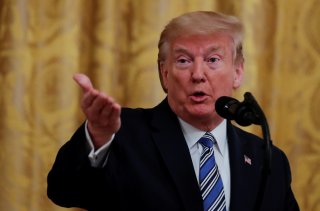 The proverbial “big red button” is one of the most important responsibilities that a U.S. President has. But Americans know very little about it.

Professor Alex Wellerstein is one of the foremost authorities on nuclear command and control. A historian of science at the Stevens Institute of Technology, Wellerstein created the popular NUKEMAP tool for understanding the likely effects of a nuclear war, and has written extensively on the history of the U.S. nuclear arsenal.

The National Interest spoke to Wellerstein about presidential authority, myths swirling around the “big red button,” and how a nuclear war might—and probably wouldn’t—unfold. Below is a transcript of Part One of the conversation, lightly edited for brevity and clarity. The Part Two can be found here here.

Good to talk to you, Professor Wellerstein. With everyone so focused on the coronavirus pandemic, I figured we could talk about a lighter subject—nuclear weapons.

It's easy to focus on the thing that's right in front of you.

You outlined a scenario in January that would be more dangerous than a “crazy President” situation: the President ordering a “limited” nuclear strike on the advice of one or more of his advisors. You wrote this scenario would be similar to the way that the Suleimani killing unfolded—could you elaborate on that analogy?

What I know about the Suleimani killing is entirely from news reporting on it, of course. Much of the reporting on it, which sounds plausible to me...implies that the Soleimani killing was one of several options that was given to the President. This is in line with what a lot of people have discussed how the military and national security advisors attempt to deal with Presidents and mold decisions in their own way.

They'll give Extreme Option, Overly-Mild Option, and then the option that they would like, the idea being that any sort of sensible President will weed between these options and they can get the President to feel like they made a firm decision and played a part, even though they've been guided down this path…

Let's imagine some sort of conflict with Iran, and we learn that Iran's leaders or their nuclear technology is in some sort of buried bunker. You can imagine an advisor going to the President in this scenario and saying, here are two options to respond to their latest transgressions. One might be to have another sanction against Iran. That might be the mild option, because there's already a lot of sanctions.

The extreme option might be that we use a low yield nuclear weapon against this underground facility and destroy their nuclear capabilities. Then another option might be we use a conventional weapon on the same facility, which probably won't destroy it, but would damage it and disturb the Iranians.

Under most Presidents, you'd assume that, given that option, it would be a lot easier for them to pick the conventional option, because a nuclear option of any sort is going to be seen as extreme. But, in the end, you're giving this judgment to a single person, who may not—and I think Trump has indicated that he does not necessarily share the norms of the foreign policy or the international community about anything.

That is a very dangerous situation. Is that likely? I don't know. But it doesn't strike me as implausible.

The other difficulty with the low-yield nuclear weapons is that they make it harder to take a principled stand against them. If an order does come in that says, "use a nuclear weapon," there are many ways in which the military, advisors can try to redirect the President's will, can try to say, "that won't work, because that's a war crime."

Low-yield nuclear weapons, by deliberately blurring the lines between the conventional and the nuclear, they make it harder to say no. I worry that in such a situation, you could end up with really rather extreme choices being taken, without awareness that they're extreme…

The war crimes angle you brought up is interesting…As you've written, a “crazy President” scenario is not as dangerous because the military could just refuse orders that are an obvious war crime.

What would the process actually look like inside the White House for telling the President, "that's an illegal order, we can't follow through with that"?

That's a good question. This is uncharted territory. It's hard for anybody, including even the generals who would be involved in that, to say what would happen or what that would look like. It's never happened, to our knowledge.

From the testimony of several generals—there was a congressional testimony in 2018 about this question—basically, the American system for launching nuclear weapons is, on one hand, complicated, but on the other hand, could be reduced down to a pretty simple element.

The President has to give an order. It has to be received by a couple people who can receive it and act upon it. The head of the Joint Chiefs of Staff, the head of Strategic Command—these are people who seem to be the conduits. They take that order, the military, and then they relay that order onto the combatant commands….

We don't have a system that's designed to have gatekeepers for this order.

How would this look? The military, let's say they get this order. Let's imagine it's the head of Strategic Command.

They're going to have access to a whole staff of people around them, including lawyers, who are going to make sure that everything that is ordered passes through the standards that the United States government interprets international law to be, which may not be how it's interpreted in other countries, it may not be how the Hague interprets it.

But we have guidelines that have been worked out at great length in advance on what kinds of situations would nuclear weapons be considered to be legal.

Let's imagine the President says, "I want you to kill everyone in China." That's pretty clearly a war crime, especially if it's out of context. But even in context, that's going to sound pretty disproportionate to almost any aims that don't involve China killing everybody in the United States.

You're going to have a very easy case of going to the lawyer and saying, "is this not proportional to our aims?" Proportionality is a key aspect of how laws of war work. They're going to say, "this is totally disproportional," especially if you're doing it to solve a trade deal or something like that.

You're going to end up with a general saying, "I cannot follow that order. We interpret that to be an illegal order."

It's not something that they have a playbook for, from what I can hear, at least not when they testified about it two years ago.

What worries me about that situation—I do think the odds of the military being able to say, "this is a bonkers idea, we're not going to pass that idea along, and if you fire us, fine, but this is not going to be on our watch"—I find that more plausible in the event of a really all out of proportion attack, a "crazy President scenario."

Even then, it's not clear what level of momentum the President might be able to generate in these types of situation, but I think it's going to be especially hard for a situation with low-yield nuclear weapons, in which the argument that it is proportional is going to be a lot easier to make.

In fact, the military's own rhetoric about why we need low-yield nuclear weapons is about why they are not as disproportional as regular nuclear weapons, and they're more appropriate to certain types of scenarios.

They already have built into their system clearly—and probably built into their legal guidance—the idea that lower yields are more usable. That's going to make it much harder to push back, I imagine.

So it's important to me that we think about these situations ahead of time, and even potentially set up a system where we're pretty sure that nuclear weapons would not be used except under—as a last resort in the worst kinds of situations.