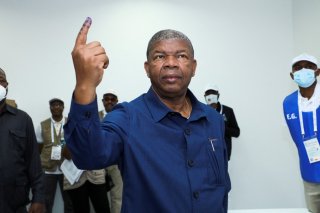 Election polls in Angola have closed, and vote counting begun. This appears to have been the most competitive presidential election in Angolan history, with incumbent leader Joao Lourenco of the long-dominant People’s Movement for the Liberation of Angola (MPLA) facing an unexpectedly strong challenge from opposition leader Adalberto Costa Júnior.

Although eight parties contested the vote, the principal contest appears to be between Lourenco and Júnior, who leads the rival National Union for the Total Independence of Angola (UNITA) party. Opinion polling in the run-up to the election showed the two candidates in an extremely close race, and several predicted that Júnior might win—making him the first non-MPLA leader of Angola since the country’s independence from Portugal in 1975.

Although Angola is Africa’s second-largest oil producer behind Nigeria, the fantastic dividends from the country’s hydrocarbon wealth have failed to substantially improve its citizens’ quality of life. Roughly half of all Angolans live in poverty, and the country’s youth unemployment rate exceeds 50 percent. In spite of this, Luanda, Angola’s capital, is regularly ranked as the most expensive city in the world, due mostly to the country’s remote location and the difficulty of importing goods. Júnior, an engineer and longtime UNITA member, has often cited the stark division in Angola’s living conditions as proof of the MPLA’s failure to govern effectively during its four-decade rule.

On the day of the election, in a campaign speech at Luanda’s Lusiada University, Lourenco urged his supporters to vote, claiming that “democracy wins and Angola wins” if he secured a second term. Roughly half of Angola’s population of 32 million were registered to vote, although turnout has not yet been determined; the current election also marked the first time that Angolans living abroad were able to vote remotely.

Founded in 1966, UNITA initially fought alongside the MPLA against the Portuguese military during Angola’s war for independence. However, after the Portuguese withdrawal, the two former rebel movements turned on each other, fighting a twenty-seven-year civil war. After it began, the war in Angola became part of the larger Cold War, with the Soviet bloc supporting the MPLA and the Western powers backing UNITA.

Following the death in 2002 of its leader, notorious Angolan warlord Jonas Savimbi, UNITA agreed to abandon its armed struggle and participate in electoral politics. In Angola’s most recent election in 2017, it won fifty-one out of the country’s 220 parliament seats, against the MPLA’s 150.