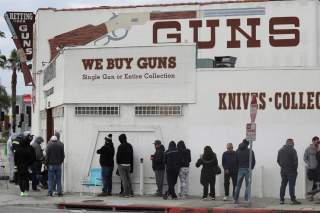 As panic about the coronavirus pandemic spreads, more and more grocery stores and businesses are suffering from panic purchases and subsequent product shortages. Across the country, multiple store shelves are barren of toilet paper, hand soap, hand sanitizer, tissues and pasta. Guns are also being purchased at a rapidly increasing rate.

It’s not unusual for the sale of guns and ammunition to go up when people are panicked. Guns make a person feel safer about their surroundings and feel more prepared for a worst-case scenario. Gun sales typically spike after elections and amid natural disasters, and following major crime stories in the news.

While large gun shows have been canceled due to the virus, online and in-person sales have spiked. Pictures of people waiting at gun stores in lines that go down the block have flooded social media. From March 10, when cases of the coronavirus reached over a thousand in the United States, and today (one week later), Ammo.com reports an unprecendented 276% surge in gun sales. A federal tally of background checks conducted in March will not be available for several weeks. That said, February 2020 experienced a 36 percent increase in background checks when compared to February 2019

While obviously firepower will be useless in stopping the coronavirus, citizens are preparing for what they fear will come as a result. Across the country, restaurants and bars are shuddering their doors at the behest of the government for the duration of the crisis. The immediate result of this will be a large number of people in the lower-income bracket who have lost their jobs and have no means of income for what could be at least an eight-week period of isolation.

Gun buyers, many of them purchasing weapons for the first time, appear to be acting on the assumption that mass unemployment will lead to desperation. And an increase in desperate people could lead to marginal increases in crime such as commercial breaking and entering, residential break-ins, or even looting.

The federal government is currently trying to avoid these foreseen side effects by passing a third coronavirus relief bill. Senate Minority Leader Chuck Schumer (D-NY) has been pushing a bill that would allocate money directly to the people impacted by the crisis. It would act as a rudimentary form of a universal basic income.

In the meantime, some of the local governments are taking the increase in gun sales very seriously. LaToya Cantrell, the mayor of New Orleans, recently signed an emergency proclamation declaring that it is within her authority to “to suspend or limit the sale of alcoholic beverages, firearms, explosives, and combustibles” during the crisis. Similar actions were taken in New Orleans during Hurricane Katrina when then-Mayor Ray Nagin began confiscating firearms. Second Amendment groups have promised to challenge the order in courts.