The Czech Sa vz. 23 Was a "No Frills" Submachine Gun That Was Ahead of Its Time 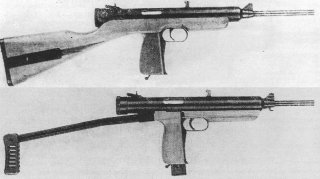 Militaries around the world loved the Israeli-made Uzi, the open-bolt, blowback-operated submachine gun. Its telescoping bolt design allowed the magazine to be housed in the pistol grip, which created a shorter weapon. However, the Uzi – developed in the early 1950s – wasn't the first to utilize such a revolutionary concept.

Two different designs from the World War II Axis powers could lay claim to being the first, but neither the Japanese Type II nor the Italian OG-43 was all that successful. One factor is that both of those weapons were little more than prototypes that needed serious refinement.

After the Second World War, the Czechoslovakian military began to develop a new submachine gun and considered the qualities of the German MP40, the American Thompson, and the British Sten Gun among others. After testing a variety of weapons, a prototype Cz-447 (4th model, 1947) was selected for further development under a team led by Jaroslav Holečekat the CZ-UB arms factory.

By the middle of 1948, the 9mm Samopal Vz 48b was introduced. It has been described as a "no-frills" submachine gun and features a basic tubular-shaped receiver that houses the firing action. It has simple iron sights and is capable of firing about 600 rounds per minute with a muzzle velocity rating of 1,800 feet-per-second.

It was the first production submachine gun to have a magazine in the pistol grip and utilized the telescoping bolt that would be later seen in the Uzi. What was especially unique about the Czech-designed submachine gun was the fact that the trigger worked as a fire selector. Short trigger pulls would produce a single shot (semi-automatic fire) while long pulls produced a burst fire.

The weapons were only used for a short period of time before the Soviet Union pressured the Czechoslovakian military to use the 7.62x25mm TT pistol ammunition in its handguns and submachine guns. Thus, the weapon was updated as the Sa vz. 24 and Sa vz. 26 respectively. The 9mm versions were then relegated to local militia units while many were sold off as surplus. There are reports that the 9mm versions were sold to South Africa and because the ammunition was so plentiful the Sa vz. 23/25 became popular with the various mercenary units that took part in conflicts in the Congo and other African conflicts in the 1960s and into the 1970s.

The Sa vz. 23/25 were also used by insurgent forces during the Nigerian Civil War, the Portuguese colonial wars, and some are still encountered today in the Syrian Civil War. A copy of the weapon was also produced in Rhodesia in the 1970s as the LDP and known affectionately as the "Rhogun!"

Even with the Soviet cartridge, the weapons' use was short-lived as it was replaced by the far more effective Sa.58 assault rifle in the early 1960s – a weapon that has been described as the Czech's answer to the Soviet-designed AK-47.