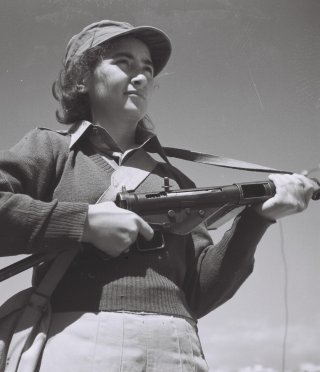 There is no denying that the machine gun changed the modern battlefield in ways no one expected—military planners saw the potential in how the weapons increased the rate of fire and provided a powerful defense. Because of the weight of the weapons, the early machine guns couldn't be readily used in an offensive capacity, and that is one of the underlying factors that required the armies to dig in during the opening weeks of the First World War.

Then the machine guns made it hard for the other side to mount an effective attack. It wasn't until the final months of the war that the German military adopted the MP18, the world's first widely employed submachine gun. While there had been plenty of efforts to develop light machine guns or automatic rifles—such as the French Chauchat and the American Browning Automatic Rifle and Lewis Gun—the submachine gun was "the shape of things to come."

The American Thompson submachine gun was actually in development but arrived too late to see service in the First World War. It was carried by U.S. as well as British soldiers in every theater of the Second World War. In the interwar period, the Germans secretly and later openly developed new and improved submachine guns—culminating in the MP38/40, which went on to inspire numerous post-war submachine guns. The Soviets also developed the PPSh-41, which has been considered one of the absolute best weapons of World War II.

While most soldiers in World War II still carried rifles—and in the case of the European powers those were bolt action rifles—submachine guns were issued to NCOs, officers, and other specialist troops. Except in the British Army—which by time World War II broke out had taken a different course. Instead of a personal machine gun, the British focused on providing each rifle squad with the Bren Gun—a multipurpose light machine gun.

After the defeat of France and the retreat from Dunkirk in 1940, Great Britain stood alone against Nazi Germany and needed a new weapon—one that could provide more firepower but also would be cheap to produce. That weapon was the StenGun.

Designed by Major Reginald V. Shepherd and Harold Turpin for Enfield, the weapon's name came from the first letter of each mans' last name, and the first two letters from Enfield—STEN. It was a simple design based on blowback operation from an open bolt, and it fired 9x19mm Parabellum—meaning it could be used with captured German ammunition as well. Production began in 1941, and the weapon was produced in both the UK and Canada.

It was made of stamped metal and required minimal welding, yet it could fire eight rounds per second from its horizontally-loaded, 32 round magazine and it was effective to about 100 meters or 300 feet. While it didn't pack a lot of punch, it could still get the job done.

Far more important was that fact that it didn't cost a lot to produce, and that allowed a lot to be produced. It cost only about £2 ($10) when at the time an American M1A1 Thompson was about $200 per unit! By the end of the war, more than four million Sten Guns in various configurations were issued.

Today, the Sten Gun is often remembered for its iconic side-mounted magazine but that was far from revolutionary, as the German MP18/28 and later submachine guns such as the MP34 and Model 1935 Erma also utilized side-mounted magazines. Moreover, the Sten's magazine was a direct copy of the German MP-38—the idea being that MP-38/40 magazines could be used in a pinch.

However, that design actually presented a number of problems, as the 9mm cartridges needed to be in a staggered arrangement. In a side-loading weapon that could be a serious issue as dirt and other foreign matter could cause feed malfunctions. Today many photos, but also many movies and video games, show soldiers holding the magazine while firing the Sten Gun. That could wear on the magazine catch, and also cause a failure to feed. The designers actually intended the Sten Gun to be held more like a rifle with the off-hand forward of the extractor. It was for that reason later that the Mark V version featured a forward hand grip.

Several versions of the Sten were produced during the Second World War, with the Mk II being the most common variant with more than two million units produced. Its removable barrel extended about three inches past the barrel sleeve, and it was advised that the weapon be held not by the magazine, many Mk IIs were issued with an insulating lace-on leather sleeve guard to protect the shooter's hand as the barrel heated up quickly from rapid firing.

The simplified Mk III was the next most commonly produced version; and production reportedly began in 1942 with Lines Bros Ltd being the primary producer of this model. It featured a unification of the receiver and ejection port, while the barrel shroud extended further up and was fixed unlike the Mk II version.

One of the more unique versions of the Sten Gun was the Mk V, which has commonly become known as the "paratrooper" version as it was widely supplied to British paratrooper prior to Operation Market Garden, the September 1944 airborne assault on Arnhem in the Netherlands. However, this version was not designed specifically for paratroopers and actually was heavier than the Mk II or Mk III versions and no more compact. It featured a wooden pistol grip, a vertical wooden fore grip, a wooden stock and a bayonet mount that could be fitted with a Number 4 Lee Enfield bayonet. It also had Enfield foresight.

Because the Sten was so easy to produce versions were made during World War II in territory occupied by the Germans. Resistance groups in France, Norway, Denmark and most notably Poland produced the weapon. According to some reports there were at least 23 underground workshops operating in Poland prior to the 1944 Warsaw uprising that made copies of the Sten Mk II as well as the Błyskawica—and the weapons were used side-by-side by the Polish Armia Krajowa (Home Army).

After the end of the Second World War, the weapon continued to be used by insurgent and revolutionary forces, and in many cases Sten Guns were used against the British Army. Caches of Stens found their way to Malayan rebels, Mau Mau terrorists, the Viet Minh and even the IRA in the years following World War II.

The Sten's simplistic design allowed it to be produced in shops around the world as well, just as it had during the war. Among the most prolific examples were those produced in the Palestine Mandate in the late 1940s. These were produced on various kibbutzim—the Jewish collective communities that supplied weapons and material to the Haganah and other Jewish paramilitary groups. According to some accounts, the Jewish-made copies were of superior quality to the actual British-made versions.