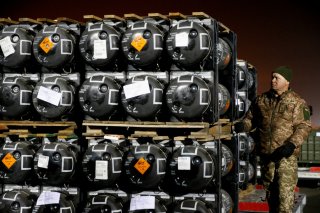 Despite that Ukrainian and Russian diplomats have begun conferring about a ceasefire, the Department of Defense (DoD) will continue fast-tracking substantial support to Ukraine in the form of weapons, money, and cooperative allied support.

However, while senior DoD officials are willing to confirm that multiple kinds of weapons and supplies are being accelerated into Ukraine, they have declined thus far to offer specific details about what weapons (other than Javelin anti-tank missiles) are being sent for security reasons.

“I think it's fair to say that the Javelins will be in this - in this next tranche as they had been in so many tranches in the past. I'm comfortable acknowledging that. I'm not going to go beyond that in terms of detail. And on the when, I can confirm for you that they have received security assistance from us,” a senior DoD official told reporters at the Pentagon, according to a transcript.

The situation in Ukraine is likely to change quickly, but initial reports from the Pentagon suggest that Russian forces have faced much fiercer resistance than they may have anticipated as they approached the Ukrainian capital, Kyiv. "We continue to believe, based on what we've observed, that this resistance is greater than what the Russians expected. And we have indications that the Russians are increasingly frustrated by their lack of momentum over the last 24 hours, particularly in the northern parts of Ukraine," the official said. The official also confirmed that President Joe Biden has authorized $350 million in support to Ukraine and that the United States and NATO are working closely to provide additional support.

“All the security assistance that we provided is in consultation with the Ukrainians. And we're confident that what we're providing them is in line with what they need,” the official said. “We have continued to flow assistance to the Ukrainians, even since the air space has become disputed and contested. And we're going to continue to look for additional venues to do that, especially now given that the President has authorized another $350 million worth of assistance.”

Given that the Russian Army operates as many as 12,000 tanks and that armored vehicles have been prevalent in Moscow’s assault on Ukraine, it makes sense that the United States will be sending additional Javelin anti-tank weapons in the near future. Javelins will also be highly effective for Ukrainian troops and resistance fighters operating in urban areas and utilizing hit and run tactics that may make them less vulnerable to incoming tank fire. However, fierce resistance could force the Russians to use heavier firepower in urban areas, which would undoubtedly raise the risks to civilian lives and infrastructure. Thus, while the West is certain to continue arming Ukraine, it is less clear how effective its support will be, and what the consequences will be for Ukrainians.