DEFIANT X Could Be a Big Part of the U.S. Army's Future 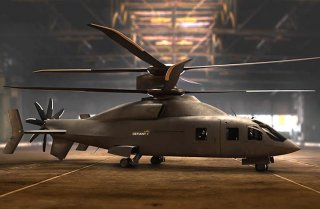 Slicing through the sky faster than 230 knots, sleeking beneath the radar clutter, maneuvering just above buildings and mountainous terrain to deliver infantry into the hostile fire for a massive, coordinated attack, are all mission sets planned for the Army’s now fast-emerging Future Long-Range Assault Aircraft (FLRAA).

The FLRAA program is intended to fly alongside, complement, and greatly expand the Army’s Black Hawk helicopter, which will fly into the 2030s, 2040s, and 2050s if not longer. It is part of the Future Vertical Lift (FVL) program intended to improve, reshape and change paradigms for air attack and helicopter missions moving into future decades. The Army is currently working with two competing vendors in a developmental phase for the FLRAA aircraft wherein designers and builders are submitting their formal configuration proposals: Bell Helicopter and Sikorsky-Boeing. The products produced by both companies are being closely examined by the Army as possible options for a new generation of attack and utility helicopters and their designs are quite different.

What Makes DEFIANT X Stand Out

Bell Helicopter’s V-280 Valor is a tiltrotor aircraft intended to advance beyond the capacities of today’s V-22 Osprey. The DEFIANT X much more closely mirrors the size, shape, and form of existing Black Hawks. At the same time, while some of the length, height, and width specifics of the DEFIANT X are comparable to a Black Hawk for both logistical and operational purposes, the new Sikorsky-Boeing offering introduces an entirely new, far more advanced helicopter. The DEFIANT X, which can travel at speeds equal to or greater than 230 knots and fly twice as far as a Black Hawk without needing to refuel, also brings an entirely new suite of mission systems, targeting technology, command and control, and weapons applications.

Speed, Range and Maneuverability (And Much More)

The DEFIANT X achieves its breakthrough speed, range, and maneuverability through a series of helicopter innovations to include more power and efficient torque management and distribution, coaxial counter-rotating rotor blades, and a smoother, less jagged, and therefore stealthier configuration with fewer protruding external structures likely to generate a return radar signal. The DEFIANT X can load up with litters for medical evacuation missions, missiles, and guns to roll out of a stealthy internal weapons bay or transport large numbers of armed infantry for a coordinated assault.

Two of the largest breakthroughs with the DEFIANT pertain to maneuver and propulsion. Unlike a Black Hawk, which, having a single rotor blade, has to lower its front section to create the airflow angles sufficient for faster speeds, the DEFIANT X can double the speed while staying parallel to the ground and flying in a straight, more linear fashion. The airflow is balanced by counter-rotating blades, therefore enabling massive maneuverability without pulling the front of the aircraft up to slow down or lowering the nose to increase speed. This stabilizing, dual-rotor configuration allows the DEFIANT X to fly straight without needing a side-mounted, small rear rotor to maintain alignment like that which is on the Black Hawk, a scenario which opens up the chance to place a vertical rotor perpendicular to the rear of the aircraft to both maintain flight trajectory alignment and adding massive new amounts of “thrust” or propulsion to achieve breakthrough speeds.

Unlike a fighter jet engine propulsion system which sucks in air, compresses the air, combines it with fuel to generate a controlled explosion pushing force out of the back for thrust and speed. The DEFIANT X takes air in through its ducts or inlet then compresses and ignites the air with fuel. But instead of generating something like an “explosive” thrust out the rear, the DEFIANT X’s engine helps send a massive amount of “twisting force” or “torque” down to rear rotor or up to the main rotor. Torque distribution can be optimized by managing the amount of torque which goes to the rear and main rotor blades to achieve the ideal balance between speed and maneuver depending upon the mission, Lockheed-Sikorsky developers tell the National Interest.

For instance, should the DEFIANT X be traveling at higher altitudes from one point to another, more torque is likely to go back to the rear rotor blade to maximize thrust. However, should there be a need to hover and maneuver carefully lower to the ground, then naturally more torque will likely travel to the main rotor blades. This combination is what developers had in mind when initially developing the concept for FVL. For many years, the intent has been to engineer a future aircraft able to both achieve air-plane-like speeds and also hover and maneuver closer to the ground like a helicopter.  The added “torque” and resulting increase in thrust and maneuverability also brings the advantage of additional lift. The DEFIANT X recently succeeded in airlifting 5,300 pounds, an ability sufficient to slingload an M777 towed Army Howitzer artillery weapon, a key system which currently must be carried by a very large and more vulnerable Chinook cargo helicopter.

Built on a Foundation for Success

The overall concept is to build upon the success and combat performance of the Black Hawk, while bringing innovations and a new generation of technology to an entirely redefined threshold. This is quite significant, given that the latest U.S. Army Black Hawk M helicopter is engineered with an upgraded, high-powered and fuel-efficient engine, composite rotor blades and vastly enhanced digital cockpit displays and targeting systems. In recent years, the Black Hawk helicopter has had great success across a wide sphere of missions to include medical evacuation, air assault, troop, cargo and ammo delivery, close air support to advancing ground forces and large-scale infantry attacks.

The DEFIANT X operates with more volume, an internal weapons bay option smoother, stealthier external configuration, yet it is by design closely aligned with the size and shape of the Black Hawk.  The width of the Black Hawk is 53.7 and the width of the DEFIANT X is 56.6, and there is only a marginal difference in height. Designers of the DEFIANT X chose this deliberately to avoid having the rebuild hangars and maintenance facilities for the new helicopters.

“If you can park a Black Hawk, you can park a DEFIANT X. If you can put three or four Black Hawks in a hangar, you can put three or four DEFIANT X’s in the hangar,” Ed Fortunato, the vice president or Army Aviation Programs for Lockheed-Sikorsky, told the National Interest. “You don’t need to spend more time, more money and more energy building additional infrastructure to support what you already have today throughout the globe.”

Of equal or even greater value, Sikorsky engineers chose a Black Hawk-like form factor for tactical reasons too. After all, smaller aircraft can more effectively fly in larger numbers in formations to ensure large scale attacks in close proximity. Should a “hot” or contested landing zone require a large amount of soldiers to descend and attack for a “forcible entry” operation, larger numbers of troops would need to arrive and dismount in rapid succession and in close proximity. A larger tiltrotor formation would need to operate and approach at much farther distances due to an aerodynamic phenomenon known as “rotor downwash.”

The larger an aircraft is, the greater the amount of disruptive, turbulence-generation “rotor downwash” there is. This is something that can destabilize or even fully destroy flight trajectory or lift for aircraft. Rotor downwash is caused by horizontally rotating blades and is most noticeable when a helicopter is hovering, which is the kind of position it will need to be in for troop delivery for air assaults.

A 2007 U.S. Army white paper titled The Fundamentals of Flight further describes the “downwash” phenomenon as an aerodynamic circumstance that can generate unstable, turbulent air components in the surrounding vicinity of an aircraft when rotor blades generate a “downward flow of air.”

“As blade pitch angle is increased, the rotor system induces a downward flow of air through the rotor blades creating a downward component of air that is added to the rotational relative wind. Because the blades are moving horizontally, some of the air is displaced downward,” according to the white paper. “The blades travel along the same path and pass a given point in rapid succession. Rotor blade action changes the still air to a column of descending air. This downward flow of air is called induced flow (downwash). It is most pronounced at a hover under no-wind conditions.”

“In the end, it’s about the amount of combat power you can put on the objective,” Macklin said. “We’re not having to slow down to land. We can get on the ground a lot faster.”