Democrats Have a Plan to Beat Bernie Sanders: Call Him a Russian 'Asset' 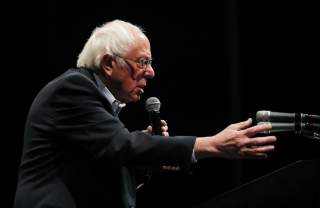 Even though polls have forecast the outcome for some time, the Democrat elite appeared to lose its mind over the resounding victory by Bernie Sanders in Saturday’s Nevada caucus. The outcome and stunning margin make Sanders the man to beat for the Democrat nomination.

Bernie won despite a half-baked effort by the Democrat establishment to tag him with its favorite and seemingly only smear: that he is a Russian asset.

One day before the Nevada caucus, the Washington Post alleged that the Russian government is attempting to help Bernie’s campaign, but cited only anonymous sources and provided no details. President Trump, who sits atop the U.S. intelligence bureaucracy, rejected the claim.

The Washington Post is owned by billionaire Jeff Bezos, who implored fellow billionaire Michael Bloomberg to run for president, which the former New York City mayor eventually decided to do. That may be one reason why Bezos’s reporters are hostile to Sanders, and last August called Bernie’s complaints about unfair reporting a “conspiracy theory.” And yet it is the Post that traffics in baseless conspiracy accusations.

As Ken LaCorte observed, in January of 2018, a Washington Post opinion headline boasted, “The entire Republican Party is becoming a Russian asset.” A year later: “Here are 18 reasons Trump could be a Russian asset.” In July: “Mitch McConnell is a Russian asset.” In December: “It has come to this: Ted Cruz is Putin’s stooge.” Now the smear the establishment blithely used against Republicans is being turned on Sanders.

In attacking both fellow Democrats and its Republican opposition, the Democrat elite seems unfazed by the fact its false allegation of Russian collusion, which was the basis for the prolonged investigation of Trump, was debunked by the Mueller report. It won’t work against Bernie either: one can only cry wolf so many times.

(It’s also worth noting that Bloomberg’s net worth of $65 billion is about the size of Russia’s official defense budget. If Russia is able to expend resources influencing the 2020 campaign, it will again be minor and have the same irrelevant direct impact it had in 2016.)

The Democrat establishment would be in a much better position opposing Sanders if it had stuck to facts. Bernie’s radical agenda and the general leftward tilt of the party in recent years closely mirrors the trajectory of the British Labour Party. There too, a frontman whose socialism seemed like a throwback to the last century, Jeremy Corbyn, combined with an obsession with wokeness, led to the electoral slaughter and the near-death of the party.

Explaining to primary voters that this reality awaits Democrats in November if they nominate Bernie might be more effective than pretending there is a Russian agent under every bed. In other words, the Democrat establishment would be better off not presuming its voters are stupid.

The campaign now moves to South Carolina, where former Vice President Joe Biden has held a narrow lead in polls. However, a Biden victory there is likely to be narrow, and he may even lose to Bernie after tonight’s big win for the Vermont senator. Biden supposedly has strong support among blacks, who comprise 60 percent of South Carolina’s Democrat primary voters. But much of that stemmed from an earlier view that Biden would be the Democrat most likely to beat Trump. But recent electoral failures have undermined that claim.

Furthermore, Bernie’s appeal evidently extends well beyond the core woke left. Nevada is unusual in its union membership rate of 13.9 percent of the workforce. This is the highest of any non-coastal state in the west and particularly surprising for a right-to-work state that bans forced union membership. Nevada also has a large and growing Latino population. Bernie’s strength among Democrats in these groups shows his appeal on the left is actually broadening.

Bloomberg was not on the ballot in Nevada, nor will he be in South Carolina next Saturday. However, he will be on Super Tuesday on March 3rd, which covers 14 states, including Texas and California. Only then will we know if Bloomberg’s massive deployment of his personal wealth on advertising can stop Bernie.

Meanwhile, back in Washington, the Trump administration announced the early stages of a process that could end America’s involvement in the 19-year Afghanistan War on decent terms. If that succeeds, it will be another parallel to 1972 where incumbent Richard Nixon’s withdrawal from Vietnam contributed to his landslide reelection. One big difference: Trump’s economic record far surpasses Nixon’s.