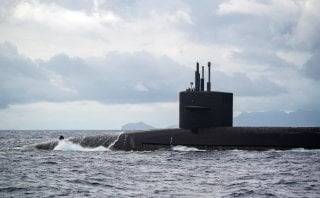 The U.S. Navy has zeroed out the budget line for its previous plans to develop a new, nuclear-capable sea-launched cruise missile (SLCM-N), a non-strategic nuclear weapon that was first called for in the 2018 Nuclear Posture Review (NPR). The previous administration's NPR called for the rapid integration of new, low-yield nuclear weapons to expand the range of possibilities available to commanders pursuing a strong nuclear deterrence posture. The document also called for the introduction of a low-yield variant of the submarine-launched, nuclear-capable Trident II D5 weapon. The Pentagon has already built this weapon by modifying the existing Trident II D5.

The Biden administration’s decision to cancel the SLCM-N has generated debate and some concern among lawmakers, some of whom have asked the Navy to explain the rationale for no longer pursuing the weapon. Several members of the Senate Armed Services Committee questioned the Navy’s leadership about the decision, raising a concern that it might leave the United States unnecessarily vulnerable in some respects.

Secretary of the Navy Carlos Del Toro told members of the Senate Armed Services Committee that the president has sufficient tools to deter adversaries from considering the use of nuclear weapons. He explained that this includes an ability to deal with the threat of tactical nuclear weapons.

Years ago, when former Defense Secretary Jim Mattis was explaining the rationale for the SLCM to Congress, he argued that it was an important mechanism to use in efforts to bring Russia back to the negotiating table given its violation of the Intermediate-Range Nuclear Forces treaty, or INF. Lawmakers questioned Mattis as to whether the introduction of newer, low-yield tactical nuclear weapons might lower the threshold to nuclear confrontation or make officials more confident in a limited nuclear engagement. Mattis responded that the introduction of these weapons was not intended to increase the likelihood of a nuclear engagement. Rather, Mattis said, it was intended to strengthen the United States’ deterrence posture by giving commanders more options with which to hold an enemy at risk. He explained this in the specific context of Russia’s known arsenal of tactical nuclear weapons and the importance of establishing the leverage and deterrence posture necessary to again try to negotiate with Russia.

Chief of Naval Operations Adm. Michael Gilday told Congress that there is a clear “capability gap” that will be left unresolved without the SLCM-N. However, he made a point to add that there are quite possibly other weapons capable of achieving the desired deterrence mission set.

The issue of tactical nuclear weapons takes on even more urgency given the war in Ukraine and the consistency with which Putin has raised the possibility of using nuclear weapons. Such a posture may simply be a manipulative attempt to keep NATO at bay by introducing the reality of nuclear war, but some express concerns that if backed into a corner, Putin may indeed use nuclear weapons. Perhaps he would use a tactical nuclear weapon against Ukraine with the hope that such an engagement would not escalate into global thermonuclear war? The Pentagon, including Defense Secretary Lloyd Austin, have been very clear that they believe Putin’s saber-rattling is dangerous and “irresponsible” for a nuclear power. The Pentagon has deliberately declined to engage in escalatory nuclear rhetoric, but it still emphasizes its confidence in the capability and readiness of the current U.S. nuclear deterrent.