The U.S. Military Will Soon Have a New 'Nuclear Sea-Launched Cruise Missile' 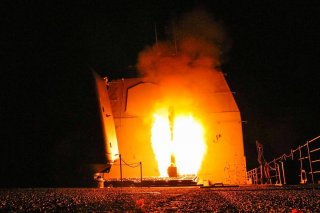 The Pentagon will be unveiling a new tactical nuclear weapon as part of a broad effort to further deter Russia and China while also implementing the aims of the 2018 Nuclear Posture Review, which called for the addition of several low-yield nuclear weapons to the U.S. arsenal.

“We are going to be unveiling the nuclear sea-launched cruise missile, which is our response to Russia’s tactical nuclear weapons,” Dr. Robert Soofer, Deputy Assistant Secretary of Defense for Nuclear and Missile Defense Policy, told The Mitchell Institute for Aerospace Studies, according to a Pentagon transcript.

The emerging sea-launched, nuclear-armed cruise missile will complement the already delivered W76-2 tactical nuclear weapon. The Pentagon has configured a lower-yield warhead and reentry body to operate as part of an adapted Trident II D5 variant.

A cruise missile, able to fly at lower altitudes parallel to the ocean or terrain can in some cases better elude enemy air defenses, radar systems, or interceptor missiles and offer additional options to warfare commanders seeking to match and therefore deter potential Russian activity.

He was careful and deliberate about entertaining the argument that adding these weapons could lower the threshold to nuclear engagement and complicate the importance of an all-out response deterrence strategy.

Saying “reasonable people can disagree,” Soofer embraced the concern from those who argue that U.S. deterrence policy should include an unambiguous assurance that “any” use of nuclear weapons will result in the complete destruction of the attacker.

In response, Soofer delineated some of the tenets of the current DoD posture regarding deterrence theory, explaining that additional “flexibility” was needed to effectively counter an aggressive Russian nuclear weapons policy. Russia’s rapid addition of low-yield tactical nuclear weapons, as part of an “escalate to de-escalate” strategy, required a specific response, Soofer explained.

“We had to do something to counter Russia's perceived perception that they could use these weapons to coerce us in a -- in a regional conflict, and this led to the recommendation for the 76-2 and to the nuclear sea-launched cruise missile.The requirements for such a nuclear strategy place a premium on the survivability, flexibility and readiness of U.S. and allied nuclear capabilities. It requires a range of delivery systems and nuclear yields,” Soofer said.

Given the existence of a wider sphere of enemy weapons, the U.S. needed to adjust to more “diverse circumstances,” he added.

“We don't need to match them weapon for weapon, but we do need to be able to -- to give the president and our regional combatant commanders another option to address these Russian capabilities,” Soofer said.