How the U.S. Navy Would Transport Tanks, Artillery and Weapons in a War 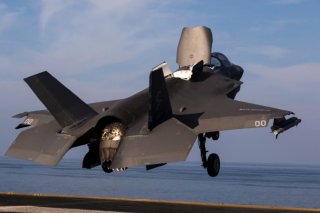 Tanks, Marines, artillery, weapons and supplies can all traverse the ocean at a speed of thirty-five knots to expedite attacks, reinforce operations, deliver special operators and support sea-basing operations on missions intended for the U.S. Navy’s growing fleet of Expeditionary Fast Transport vessels.

The Navy has now received its 12th EPF from AUSTAL USA, a shipbuilder already working on EPF 13. EPF 12, called USNS Newport, will be owned and operated by Military Sealift Command.

The ships can also on-load and off-load fully combat-loaded Abrams tanks, a circumstance which multiplies amphibious attack options from ship-to-shore. While the EPFs are not intended to function as fully-armed combat vehicles, they are indeed quite capable of supporting combat operations in a variety of key respects.

The speed of the vessels can help support the Navy’s Distributed Maritime Operations concept, a strategy aimed at leveraging long-range sensors, networking and new weapons applications to optimize combat effectiveness by operating with less congested, and therefore potentially more vulnerable, aggregated forces on the ocean.

Once a beach-head is secured through an amphibious attack, for example, arriving forces will be in great need of reinforcements to expand and build upon mission objectives. These ships also help sea-basing objectives by enabling transport from the ocean, therefore removing the need for land-deployments in high-risk, difficult to reach areas. Larger, deeper-draft ships will be able to operate at much safer distances, while EPFs approach enemy areas as smaller, faster and potentially less vulnerable targets.

By virtue of operating at sea, attacking forces can be better safeguarded and supported by airpower. Big-deck amphibious ships or even carriers could, for instance, be well-positioned to better support advancing attack forces moving on land if deck-launched air-attack platforms such as F-35 fighter jets, Osprey tiltrotor aircraft or F/A-18 supersonic jets have targeting and logistics support from the shore.

Special Operations Forces, as well, often need to move quickly in smaller groups, however, they may also need supplies, weapons, equipment and even platforms such as fast-moving tactical vehicles. Given this kind of scenario, there are mission objectives which small groups of SOF forces may not be able to accomplish with an eleven-foot Rigid Inflatable Boat which naturally cannot transport equipment.

An Osprey launched from an amphibious ship or offshore sea base may wish to conduct Mounted Vertical Maneuver operations wherein Marines drop in behind enemy lines to gather intelligence, support friendly troops of launch targeted, covert attacks. Missions of this kind would be massively fortified by an ability for a fast transport vehicle such as an EPF so lend after-landing support.