How the U.S. Military Wants to Network Its New Armored Vehicles 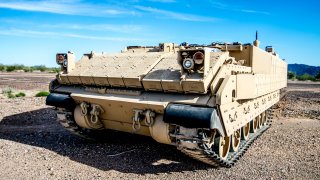 The Army is about to receive its first Armored Multi-Purpose Combat Vehicle Personnel Carrier (AMPV) slated to ultimately replace the aging, and famous, Vietnam-era M113 as part of a sweeping effort to introduce a new fleet of advanced, multi-mission infantry carriers across the force.

The first AMPV to arrive, according to its maker BAE Systems, will be the “Mission Command” variant, a “networked” platform among a planned mini fleet of multiple variants. The AMPV, having now been under development for many years, will bring a sphere of different versions to include a General Purpose vehicle, Mortar Carrier, Medical Evacuation vehicle and what BAE calls an “operating room on tracks,” a Medical Treatment variant.

It is not surprising that the Mission Command variant would be the first, given that all variants will need to be networked to one another and to the greater force as well.

The Army’s emerging combat network, according to senior Army weapons developers such as Army Vice Chief of Staff General Joseph Martin, is essential to all combat platforms and no longer restricted to a mere “point-to-point” connectivity. The network, which includes satellites, radios, data links and computer connectivity, is based upon the key premise that multiple platforms will operate with an ability to quickly share real-time war information across many “nodes” simultaneously.

“The term ‘kill chain’ is not sufficient to describe what we believe we will need in the fight in the future. Think ‘kill web,’ an ability to connect any sensor to any shooter. Below the surface, on the surface, on land, in space...these areas can all offer sensors and shooters. We want to link them together to share data in real time. I’m confident this is achievable,” Martin told an audience at an event at a think tank called The Foundation for the Defense of Democracies.

BAE weapons developers also cite the role of the network with AMPV, explaining that it “facilitates digital mission command” and advanced computer technologies.

Army combat vehicles have, for quite some time, been operating with digital moving maps, force-tracking technology and advanced targeting sensors. However, the modern network will not only be more adaptable to new technologies as they emerge but also be easier to integrate and operate across the force, Martin said. It will also, quite naturally, greatly reduce latency by synchronizing a range of assets, platforms and weapons systems at the same time. Perhaps of greatest significance, these networks are being “hardened” to better withstand hacking attempts, jamming attacks or other kinds of enemy disruptions.

As part of his discussion of the Army’s battlefield network, Martin made a point to emphasize the importance of enabling “standardized data access” to make sure otherwise disparate or differently configured platforms can connect. AI and Cloud migration, he said, is fundamental to this effort, as it can enable rapid access to time-sensitive information in a fast-moving threat environment. Standardized data, he explained, can enable a targeting or attack drone to “send bursts of data into the cloud.”

Under the current low rate initial production contract awarded in 2018, BAE Systems will deliver more than 450 of the multi-purpose vehicles.