The U.S. Air Force Is Preparing for a 'Stealth War' 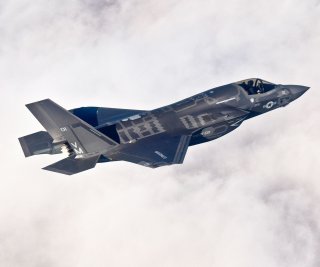 The U.S. Air Force is preparing for a “stealth war” against advanced enemy air defenses with a group of integrated airplanes and drones. These include the B-2, F-35 and famous, yet mysterious “Beast of Kandahar,” the stealthy RQ-170 drone.

It was part of what an Air Report called a “Large Force Test Event” (LFTE) intended to explore “yet-to-be-deployed” technologies such as software, weapons and tactics in a warfare scenario.

“The LFTE assessed the tactics and viability of the F35 to provide enhanced SEAD support to LO (Low Observability) platforms, including the B-2 and RQ-170, within an operationally realistic environment,” the service report states.

While it is not surprising that these stealth platforms would operate together in specific, high-risk tactical warfare scenarios, a distinguishing aspect of this appears to be its emphasis upon emerging technologies, prototypes and new-generation applications. Technically mature, promising new systems are often assessed or refined in these kinds of operations.

The primary focus of the August 4th-6th exercise was LO, or Low Observability, demonstration using new technologies, according the Majority Theodore Ellis, Chief of 53rd Wing Weapons, said in the Air Force report.

This exercise raises a host of questions, such as possible networking integration and data-sharing between the stealth platforms. The collective use of these platforms is consistent with the Air Force strategic goal to increasingly engineer a “meshed” network of interoperable aircraft designed to function as both independent combat platforms as well as “nodes” in a broader network.

For example, the F-35s have a common datalink, and innovations with various LINK 16 applications are enabling two-way information exchange between F-22s and F-35s. These technical parameters likely to provide a foundation for newer kinds of hardened, inter-aircraft information sharing.

The concept for this is quite clear, as much of it is focused upon time and sensor-to-shooter connectivity. The faster and more efficiently something like a stealthy RQ-170 drone can share navigational data, targeting information or other intelligence with other air platforms, the more effective attacks can be.

Direct one-to-one networking between otherwise different aircraft, some of which have their own systems, massively reduces latency by precluding the need to relay data through ground control centers. Such an emphasis calls to mind various potential avenues of next generation networking, such as AI-enabled, collective sensor-data aggregation and analysis, newer kinds of advanced, hardened air-to-air data links and things like encrypted radio communications. For example, a field of view or even targeting a “field of regard” can be gathered, organized and shared across several different stealth aircraft in real time.

All of this rests upon the often-discussed reality that “information” itself is increasingly a vital weapon of war.

Alongside the natural focus upon interoperability, the exercise does specifically mention the Suppression of Enemy Air Defenses (SEAD). This focus is also self-evident, yet it takes on additional complexity in light of newer, more advanced air defense technologies such as high-tech, Russian-built S-500s.

Should a stealth drone such as the RQ-170 find enemy air defenses using advanced stealth technology, it could quite possibly send that targeting data to a nearby F-35 in real time enabling a rapid attack.

Also, by design, the exercise explored the efficacy of using F-35 weapons to attack and destroy enemy air defenses, so as to open a safer “corridor” for B-2s or less-stealthy fourth-generation aircraft to attack. The F-22 and B-2, often regarded as the “first to strike,” are also thought about in this capacity.

While much is known about the B-2 and F-35, up to a certain limit, less is known about the more secretive RQ-170 stealth drone. However, the RQ-170s effectiveness as a surveillance platform is certainly well established, particularly its success during the Afghan war.

An interesting report from Aviation Week from 2009 points out its gray color as a sign that it may be most intended for medium altitude surveillance, explaining that black is often the preferred color for high-altitude stealth attack. Also, the report makes the point about wing-embedded or conformal sensors, something which could easily be described as “ahead of its time.”

Much of the discussion about sixth-generation aircraft prototypes centers around the notion of “smart skins,” referring to advanced sensors being built into the stealth exterior of an aircraft. Early iterations of this can be found with the F-22, as it uses a conformal, body-blended antenna.

Most of all perhaps, the exercise highlights the continued viability of a stealth attack. The B-21 is expected to bring a new generation of stealth technology to war, something which may be needed in light of new air defenses. Russian media reports consistently tout that their air defenses can detect and destroy stealth aircraft, a claim which does not appear to have been verified in any substantial way, at least according to available data.

The Air Force report on the tri-fold stealth exercise also cites new software applications. The B-21, for instance, is known to be integrating a new generation of sensing and data-processing software intended to greatly shorten sensor-to-shooter time as well. Legacy aircraft such as the B-2, for example are also being upgraded with new software. The B-2, for instance, is getting a new, 1,000-fold faster on-board computer processor.

One stealth expert, Retired Lieutenant General David Deptula, Dean of the Mitchell Institute for Aerospace Studies, often refers to a cutting-edge Mitchell study several years ago called “The Imperative for Stealth.” That study was a series of essays explaining that stealth configurations will be needed for decades to come.

One point Deptula made in a discussion with The National Interest is that actually engaging and destroying a stealth aircraft is much more difficult than it may seem in some instances. Even if various networked radars are able to detect that some kind of aircraft is “there,” much narrower and more precise radar beams, sensors, signals and weapons are needed to actually engage and “destroy” a stealth platform.