Why the B-21 Stealth Bomber Is Going to Be Unstoppable 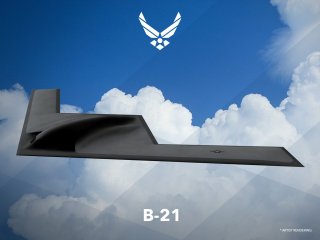 The first B-21 stealth bomber test aircraft is “starting to look like an airplane” as parts arrive, suppliers integrate technologies and production surges forward. The military’s new-generation of stealth technology will usher in a new era in long-range strike options as the B-21 comes online.

The above comment was made by Randy Walden, the Program Executive Officer of the B-21 program, who oversees its development and construction. He went on to say efforts were underway to expand production of the new aircraft.

The ultimate purpose of the aircraft was described by Defense Secretary Mark Esper during a recent visit to Northrop Grumman’s design and development headquarters in Melbourne, Florida.

“The B-21 brings the ability to strike any target anywhere is the ultimate strategic deterrent and the B-21 Raider will bring that capability,” Esper said, according to an Air Force report.

By all accounts, the program is on track to deliver within just the next few years, potentially on an expedited time frame. In fact, several senior leaders have outright said the B-21s “first formal flight” could come as soon as next year. Moreover, the current Vice Chief of Staff of the Air Force, General Steve Wilson told the Mitchell Institute for Aerospace Studies that the aircraft is merely “two years away.”

Walden’s comment reflects that production capacity expansion itself is a key indicator, which is consistent with other Air Force senior leaders’ comments that the service may ultimately build a much larger number than originally planned.

Additionally, Esper’s comment about the B-21’s ability to hold any target at risk, anywhere, is of great relevance and significance. This fundamental premise, which has now been a consistent, multi-year refrain among senior Air Force and Pentagon weapons developers, suggests that newer technologies will enable the B-21 to elude and even destroy the most advanced air defenses in the world.

The concept is to not only preserve cutting-edge stealth systems but evolve them to a new level. The concept is to engineer an aircraft able to not only avoid “engagement” radar designed to directly track and destroy a target, but also remain undetectable to lower-frequency “surveillance” radar which can often determine if something is “in the vicinity.”

Engagement radar lock is needed to actually destroy an aircraft, but if surveillance radar is able to determine that an aircraft is simply “there,” defenders can send up planes to attack.

Given these scenarios, the whole idea with the B-21 is to not only avoid being shot at, but also to enter, attack and leave enemy territory, without an enemy even knowing it was ever there. Essentially, the B-21 is being engineered to evade both kinds of radar detection systems.

The B-21 is reported to contain a new generation of stealth, which will likely be necessary given the pace of technological advancement with enemy air defenses. Much is made Russian-built S-400 and emerging S-500 air defenses, as technological trends are fast improving their ability to strike. Newer air defenses are much better networked to one another, enabling multiple radar nodes to cue one another and handoff return data. These radars can capitalize upon new digital systems and much faster processing speed and can operate on a larger range of detection frequencies.

The big question is whether they could hit a B-21? Given that the new bomber contains an entirely new generation of stealth materials, quieting technologies, thermal management, new generations of software, AI-enabled sensors and a blended wing-body curved exterior with no visible exhaust, the answer may be “no.”