Why U.S. Stealth Bombers Must Be Able to Attack from Any Angle 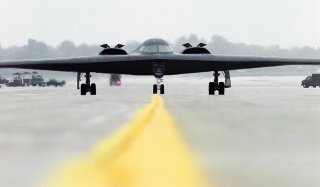 Long-range attacks, such as cruise missiles launched from more than 500 miles, can at times take up to one hour to arrive, making it more difficult to destroy moving or relocating targets; direct attacks focused on penetrating operations can often use “on-board sensors and other capabilities to complete the entire kill chain against time-sensitive targets,” the study states.

Also, closer-in penetrating aircraft can carry larger numbers of smaller bombs, something which enables longer-dwell time and an ability to track and hit newly emerging targets. More bombs would likely be needed in a heavily defended area to overcome the many countermeasures expected to thwart, disable or intercept attacking weapons. Hitting penetrating targets, also, can be a tactical advantage somewhat specific to Stand-in weapons attacks conducted by stealthy, penetrating aircraft, the study explains.

Within this same logical framework, the study goes on to say that longer-flying stand-off weapons might be more vulnerable to being detected and intercepted, simply because they are likely to be larger and spend more time traveling through the air. Citing the extent to which Russian, China, Iran and others have been developing more and more advanced countermeasures, the study explains that U.S. precision strikes will continue to face a growing number of serious challenges, when it comes to pinpointing targets:

”[C]ountermeasures include developing layered air defenses that can intercept incoming weapons; fielding increasingly mobile ground-based weapon systems to make it harder for U.S. ISR systems to locate and track; and hardening/deeply burying important installations to make them more difficult for weapons to destroy. Weapons destroyed or otherwise defeated by enemy air and missile defenses can increase the total number of weapons needed to kill a set of targets,”.... The study writes.

Despite all these factors, there of course remains a pressing and immediate need for “Stand-Off” attacks as well, given fast-emerging technical progress with enemy air defenses. The study makes the point that stand-off weapons are particularly useful at the beginning of a campaign because, naturally, they involve less risk to humans and can target key fixed infrastructure such as heavily defended command and control centers. Also, the advent of stealthier, more precise weapons, such as the Air Force’s Long-Range Stand-Off weapon cruise missile, promise to bring highly sought after tactical advantages to warfare. Advanced in-flight sensors and guidance systems are increasingly enabling long-range weapons to elude enemy air defenses. In addition, long-range weapons of this kind can both conduct ISR in some instances and also “test” enemy air defenses for soon to arrive closer-in attackers.

For example, newer Maritime variants of the Tomahawk missile are now better able to reconfigure trajectory in-flight to destroy moving targets. Also, it goes without saying that air defenses over territory controlled by an advanced adversary are likely to pose a very significant risk to human pilots working to penetrate the vicinity. Nonetheless, the need for effective “Stand-In” attacks are expected to justify the added risk, while of course considering that maximum risk-reduction measures would be put into effect.

What much of this clearly points to is that, while of course a mix of both stand-off and stand-in attacks are necessary, stealth is not going anywhere. Essentially, there will remain a clear and pressing need for attacking forces to retain an ability to penetrate heavily fortified and defended areas to successfully optimize offensive operations. This fundamental concept is why attack plans often follow a certain logical sequence, beginning with stand-off weapons to soften air defenses, to be followed by stealth bombers intended to achieve air supremacy to open a crucial “air corridor” through which less stealthy, fast-maneuvering fighters can attack. Finally, on this point, the Air Force is not only engineering a new generation of stealth with its B-21, but also making progress adding advanced, air-defense detecting sensors to its B-2.