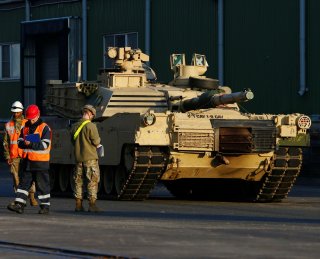 The Army is now firing off shots from a new, upgraded Abrams tank variant intended to propel the platform well into the next decade. The tank with a new generation of upgraded sensors, weapons, armor and electronic systems designed to match and destroy future enemy armored vehicles.

The new Abrams began firing its first shots on August 18, according to a report from Task and Purpose. Soldiers from the 3rd Battalion, 8th Cavalry, 3rd Armored Brigade Combat Team, 1st Cavalry Division were the first to take possession of the new tank, the report said.

This M1A2 SEP v3 effort also initiates the integration of upgraded ammunition data links and electronic warfare devices such as the Counter Remote Controlled Improvised Explosive Device—Electronic Warfare—CREW. An increased AMPs alternator is also part of this upgrade, along with Ethernet cables designed to better network vehicle sensors together.

The first v3 Abrams completed production within the last year or two and the tank is intended to pave the way forward to a new v4 variant slated to being production in 2023, Army officials have told The National Interest.

Army developers plan to “field” the v4 by 2025 and anticipate beginning early testing as soon as next year. Building upon advancements made for the v3, the Abrams v4 will include new sensors, color cameras, laser rangefinder technology, ammunition data links, meteorological sensors and an emerging, high-tech multi-purpose 120mm tank round. Meteorological sensors help weapons sights and fire control account for weather conditions when it comes to firing rounds at enemy targets.

Both v3 and v4 Abrams variants will use a new generation of Forward-Looking Infrared sensors, using higher resolution digital imaging and an ability to see through weather obscurants such as rain, dust or fog. Light and heat signatures will also be better identified by the new FLIR.