Why is the U.S. Military Building So Many New Weapons? (Like Smaller Nukes) 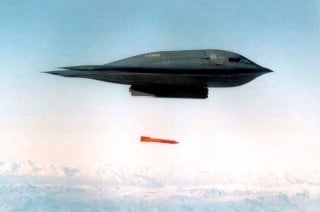 The Pentagon is celebrating multiple accomplishments towards the implementation of the 2018 National Defense Strategy. These include progress towards having hypersonic weapons by 2023, the launch of U.S. Space Command and the largest proposed research and development budget in history. Furthermore, the military has created of a first-of-its-kind low-yield, submarine-launched ballistic missile warhead. All of these milestones are cited in a recent Pentagon report.

These are all quite significant, yet the existence of a low-yield nuclear weapon and the anticipated arrival of U.S. hypersonic weapons are of particular tactical and strategic relevance. This is because, in part, they are technical arenas in which both Russian and China are extremely advanced compared to America.

Given Russian and Chinese testing of both hypersonic missiles and tactical, lower-yield nuclear weapons, U.S. equivalents simply cannot come soon enough for Pentagon weapons developers. The Department of Defense report on the National Defense Strategy says the Pentagon plans as many as forty hypersonic weapons tests over the next five years and has “already fielded” the new, low yield W76-2 weapon.

“There are currently over 1,000 nuclear warheads in the U.S. arsenal that have low-yield options. A yield is considered low if it’s 20 kilotons or less,” a 2018 an essay from the Federation of American Scientists states.

A smaller warhead on a Trident would still bring the advantage of a long-range strike, yet afford commanders the options to launch a smaller scope, and therefore less destructive, attack.

The prospect of a low-yield tactical nuclear weapon, articulated in the Pentagon’s Nuclear Posture Review, was advocated before Congress by former Defense Secretary John Mattis, who said there was a pressing need to field such a weapon given that Russia already had one.

The goal, Mattis explained at the time, was not to fire nuclear weapons as much as match Russia’s hostility with an equivalent deterrent and force them to the negotiating table. The idea was to send a message to Russia that it would not be possible or in their interests to consider any kind of limited nuclear war.

While America’s emerging new B-21 bomber will be configured to fire lower-yield, more precise B61 Mod 12 weapons, a submarine-launched nuclear weapon enables an ability to attack without having to operate planes in the air above enemy air defenses.