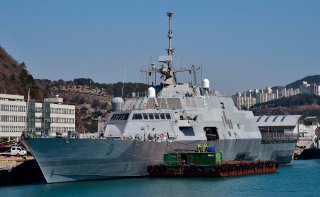 The Navy is racking and stacking its fleet of Littoral Combat Ships (LCS) at a ship-building pace not seen since the 1990s, service officials say.

Having recently completed acceptance trials for LCS 21, the Navy is hoping to deliver the same amount of the ships in 2020 than the three that were delivered in 2019, a Navy report said.

Acceptance trials, often referred to as the “last milestone” before ship delivery, include assessments of the ship’s propulsion plant, ship-handling and auxiliary systems. The delivery of LCS 21, the future USS Minneapolis, is slated for October.

The pace of LCS arrivals, it would seem, is of great significance to the Navy’s Pacific-theater strategy, particularly the South China Sea. The LCS is of course known for its forty-knot speed and maneuverability, yet its greatest advantage in the South China Sea may be its shallow-draft configuration and submarine and mine-hunting systems.

The area’s series of small island chains, often in proximity to one another, means there is an abundance of shallow water. These waters are attractive for enemies looking to place sea-mines for access denial and rival powers that want to operate submarines for clandestine reconnaissance missions. Littoral areas are of course much more difficult for deeper draft ships like destroyers to operate in, a circumstance more likely to require the multi-mission capabilities of the LCS.

The LCS operates both surface and undersea drones equipped to hunt sea mines and patrolling enemy submarines. Moreover, such drones are increasingly able to use sonobuoys, undersea sensors and semi-autonomous explosives to find and eliminate enemy threats while decreasing the risks to sailors themselves.

The LCS’s surface warfare package, it could be said, might be well equipped to counter small boat swarms emerging from Chinese man-made fake islands. Furthermore, the mere presence of an LCS in the South China Sea region, it seems apparent, might perform an important deterrence role against China’s tendency to expand its territorial claims and deny access to rival navies seeking to challenge their illegitimate claims to disputed islands.

Areas of the contested Spratly Islands in the South China Sea have, for years, been claimed by a wide sphere of Southeast Asian nations to include The Philippines, Malaysia, Vietnam, Taiwan and of course China.