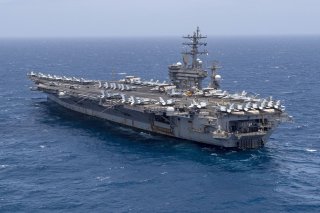 It would not be a stretch to posit that much if  not all of these questions have, at least in part, been fueled by the existence of China’s DF-26B and DF-21D “carrier killer missiles.” These weapons, emerging in recent years, have framed or at least influenced ongoing debates about the future roles, missions, and planned attack envelopes of U.S. aircraft carriers.

These often-discussed anti-ship missiles can, according to recent Chinese-government-backed newspaper reports, “adjust trajectory” in-flight while detecting, tracking, and “locking on” enemy targets. Reinforcing these claims, a report in China’s Global Times says the missiles operate as part of an integrated network to include satellites, radar, reconnaissance assets and warships.

This may or may not be true, yet either way, the threat is significant. China’s recent firing of both the DF-21D and DF-26B again brings this concern to the forefront. The weapons have an impressive range (over 1,500 kilometers in the case of the DF-21D and 4,000 kilometers in the case of the DF-26B), and if reports are accurate, are surely something to be concerned about.

This all begs the question: are these missiles true “carrier killers?” Can they prevent carriers from operating safely within certain ranges? Will their existence truly change U.S. Navy plans for carriers?  The Navy has done and continues to do, numerous assessments and analyses regarding these questions, yet a measure of debate and uncertainty still exists.

Naturally, many of the details pertaining to ship defenses are not available for security reasons, yet it is known that the U.S. Navy is making rapid progress building new high-tech ship defense systems. These include ongoing work to arm surface ships with precision-guided, power-scaled laser weapons able to optically track and then incinerate approaching targets at increasingly longer ranges. Ship-fired interceptor weapons, such as the SM-3, SM-6, Evolved Sea Sparrow Missile Block II, SeaRAM, Rolling AirFrame Missile and of course Close-in-Weapons System have existed for quite some time.

However, there have been several impactful changes in recent years, as these interceptors are much different than they were at their inception for several reasons. Virtually all of them have been upgraded in a substantial way; the SM-3 is being looked at for missile defense beyond the earth’s atmosphere, SM-6 now has dual-mode seeker able to adjust to moving targets in flight and the Block II ESSM variant can operate in sea-skimming mode to intercept lower-altitude targets flying parallel to the surface--all capabilities that can help negate various types of anti-ship weapons.

Also, perhaps of even greater significance, these layered defensive weapons are increasingly networked to one another and integrated with a common Command and Control system which enables fast target-sharing information, fire control synergy and nearly immediate target classification. As part of this, ship-based Command and Control is linked with aerial sensor nodes able to see approaching targets beyond the horizon and give commanders more time with which to determine a response.

Electronic warfare (EW) also figures prominently, especially given the current Navy effort to further connect Information Operations with EW weapons systems. This improves target awareness possibilities, networking and the technical sphere of EW attack possibilities. It could be that, with the help of advanced sensor innovations, ship-based EW systems could detect the electronic signature of an approaching anti-ship missile and “jam it,” “disable it” or simply throw its guidance systems off course.