Why the U.S. Navy Keeps Sending Aircraft Carriers to the South China Sea 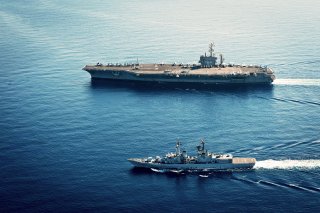 The U.S. Navy is sustaining a powerhouse presence in the South China Sea by continuing dual-carrier operations with the USS Nimitz and USS Ronald Reagan Carrier Strike Groups.

While the service has been conducting integrated, dual-carrier attack training for quite some time in the region, the continuation signals a decided effort to sustain major combat power projection amid continued U.S.-China tensions.

The training operations, according to a Navy report, are taking place in the highly contested South China Sea to bring “endurance, maneuverability and firepower” to the area.

The Navy report describes the U.S. presence in familiar terms, saying it is intended to clearly demonstrate that the “U.S. resolve to fly, sail and operate wherever international law allows.”

Nonetheless, while a consistent, strong Naval presence in the area is by no means unprecedented, dual-carrier attack training does bring a particular attack capability to the Pacific.

A larger concentration of integrated Carrier Air Wings, Destroyers and Cruisers massively expands the possibility of launching a large, coordinated attack. Naturally, the Navy consistently refers to these kinds of training exercises as “deterrence” and not offensive operations in any way, they would enable the U.S. Navy to fire a huge salvo of long-range, precision-guided Tomahawk missiles at multiple targets simultaneously. Two Carrier Air Wings could not only enable expansive and dispersed air attacks but also greatly expand integrated surveillance and defensive operations.

For instance, an aerial node such as a carrier-launched Hawkeye surveillance plane could operate as an airborne sensor able to relay target data between dispersed, yet integrated Carrier Strike Group Ships.

Kris Osborn is the defense editor for the National Interest. Osborn previously served at the Pentagon as a Highly Qualified Expert with the Office of the Assistant Secretary of the Army—Acquisition, Logistics & Technology. Osborn has also worked as an anchor and on-air military specialist at national TV networks. He has appeared as a guest military expert on Fox News, MSNBC, The Military Channel, and The History Channel. He also has a Masters Degree in Comparative Literature from Columbia University. This article appeared earlier this year.