2020 China Military Power Report: How Beijing Plans to Be a Superpower by 2049 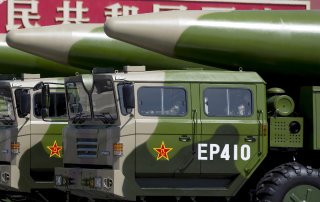 China plans to surpass U.S. military power by 2049 as part of an ambitious plan to massively expand Beijing’s global reach, economic and political influence and international military superiority, according to the Pentagon’s 2020 China Military Power report.

“It is likely that China will aim to develop a military by mid-century that is equal to, and in many cases superior to, the United States’ military or that of any other great power that the Chinese view as a threat,” Chad Sbragia, Deputy Assistant Secretary of Defense, China, told reporters according to a Pentagon transcript.

Indeed, China’s defense budget has nearly doubled during the past ten years. Moreover, in early 2019, the PRC announced a 6.2-percent inflation-adjusted increase in its annual military budget to $174 billion, the report cites.

Overseas economic and political expansion, including the construction of military bases, is fundamental to China’s ambition. China’s overarching goal, as explained by Sbragia, is to “revise the international order.”

China has recently added a military base in close proximity to a U.S. facility in Djibouti, Africa, in what could be seen as a transparent move to rival U.S. influence in the region.

Chinese African involvement is of great significance to the United States for a variety of pressing strategic issues. The roughly 6,500 U.S. troops based in Africa train local allied forces, conduct a range of counterterrorism missions and seek to expand U.S. security amid instability, terrorism threats and potentially malicious foreign intrusions.

Chinese ambitions expand far beyond Africa, the report explains, adding that China appears to be developing concepts for “offensive operations” within the second island chain, in the Pacific and Indian Ocean.

China’s undersea reach is expanding as well, as multiple reports have spotted sightings of new Jin-class ballistic missile submarines far from Chinese shores, in what can be seen as an overt expansionist move to spread influence and expand the areas it can potentially attack. Some of China’s new JL-3 submarine launched ballistic missiles have a reported range of up to 4,000 miles. Depending upon where submarines are on patrol, these weapons could clearly threaten certain parts of the continental United States.

China is seeking to establish a more robust overseas logistics and basing infrastructure beyond its current base in Djibouti. Beijing is also, according to the Pentagon assessment, quite likely looking to add military logistics facilities in Myanmar, Thailand, Singapore, Indonesia, Pakistan, Sri Lanka, United Arab Emirates, Kenya, Seychelles, Tanzania, Angola, and Tajikistan.