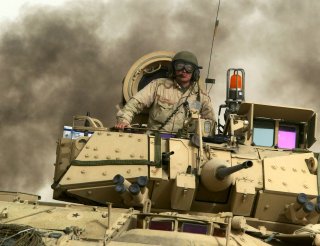 “From the beginning we said we would learn early and learn our lessons quickly. We have released a request for proposal for a design concept and will receive design proposals later this month,” General Joseph Martin, Army Vice Chief of Staff, told an audience at a recent event at the Foundation for the Defense of Democracies.

The industry proposals are expected to include several industry competitors as well as an internal Army design team, Martin explained.

The new platform, part of the Army’s emerging family of Next-Generation Combat Vehicles, seeks to incorporate the service’s new vision for modern Combined Arms Maneuver. New weapons and sensing precision and ranges, coupled with advanced electronics and engineering are expected to deliver a faster, lighter-weight, more lethal and much better networked vehicle than the Bradley Fighting Vehicle it is replacing.

“Optionally-Manned” is an operative term here, as the vehicle is being engineered to operate with new levels of autonomy and AI-enabled navigational systems, enabling the vehicle to perform high-risk missions without placing soldiers in harm’s way. At the same time, the OMFV is also engineered to coordinate with the Army’s Robotic Combat Vehicle platforms, emerging systems which also draw upon new levels of autonomy, weaponry and advanced computer algorithms. The concept is to offer “options” to commanders who might need to make rapid adjustments amid a fast-moving dynamic combat environment.

Army developers have told The National Interest that the new vehicle will likely operate with a three-man crew, carry six-soldiers in back and ultimately fire a 50mm cannon. The new longer-range “TOW missile-compatible” weapons may arm the new platform, senior Army developers said, as a way to destroy enemy armored vehicles at a safer stand-off range. Also, these new missiles are very likely to be configured with newer, more varied explosives able to destroy enemy tanks, armored vehicles and infantry formations to a much greater extent than existing weapons can.

Also, new platforms are being increasingly engineered with common technical standards such that they can conduct “joint” attack operations with Air Force and Navy platforms.