Did You Know: Any Plane Carrying President Trump Is Technically 'Air Force One' 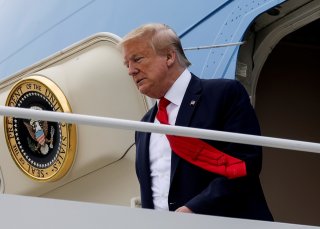 Currently, there are two heavily modified Boeing VC-25 aircraft – a military version of the Boeing 747 – that are used to transport the President of the United States on official business. This fleet is operated by the United States Air Force as "Air Force One," but only when the President is on the aircraft. Officially designated VC-25A and having the tail numbers 28000 and 28000, the planes act as the "White House" in the sky – whether for official business or unofficial travel such as political trips.

The two aircraft first entered service in 1990 – and are just the latest Presidential aircraft and certainly won't be the last as Boeing was awarded a $600 million contract to work on a new Presidential transport aircraft.

However and more importantly, any U.S. Air Force aircraft carrying the President of the United States is thus "Air Force One."

However, that name wasn't used in the first aircraft to ferry the President. As a bit of trivia the "first President to fly" was Roosevelt – but in fact, it was former President Theodore Roosevelt who has the distinction of being the first! He accompanied aviator Archibald Hoxsey in a short flight outside St. Louis, Missouri in October 1910, and it would be another 33 years before a sitting President flew. That was Theodore's fifth cousin, Franklin Delano Roosevelt, who used two airplanes during World War II – the Dixie Clipper and Sacred Cow.

The "Sacred Cow" was a specially modified Douglas C-54C Skymaster, and it included an elevator behind the passenger cabin, which was used to lift President Roosevelt and his wheelchair in and out of the aircraft. It was on that aircraft that Roosevelt traveled to the Yalta Conference in February 1945. After his death, the plane remained in presidential service for the first 27 months of the Truman administration.

In 1947 the Air Force replaced the Sacred Cow with a Douglas C-118 Liftmaster, the military variation of the Douglas DC-6. Named "Independence" in honor of President Harry S. Truman's home town of Independence, Missouri, the aircraft was in service for six years. Among its most notable flights was in October 1950 when it was used to transport the President to Wake Island to discuss the situation in Korea with General Douglas MacArthur.

In November 1954, President Dwight D. Eisenhower and First Lady Mamie Eisenhower christened the modified Lockheed VC-121E Constellation "Columbine III" after the state of flower of Colorado – her adopted state. The Constellation was an aircraft that Eisenhower had been familiar with as the original "Columbine" was used to transport him when he was a U.S. Army General; while the second served as his first Presidential airplane. The third – and only Lockheed VC-121E built – was retired when he left office in January 1961.

The First Air Force One

The first jet to serve as the Presidential aircraft was a Boeing VC-137C SAM 26000. As it lacked a formal name, the new media popularized the call sign "Air Force One," as the aircraft's name. It was also the first to feature the striking blue and white paint scheme along with the words "United States of America" on the side. The design was developed by First Lady Jacqueline Kennedy with famous industrial designer Raymond Loewry.

It was the aircraft that President John F. Kennedy flew to Dallas in November 1963, where he was assassinated, and where Vice President Lyndon B. Johnson was sworn in as the 36th President. SAM 26000 also carried the casket containing President Kennedy's body back to Washington, D.C. To accommodate the casket, four seats were removed from the passenger compartment.

Despite the tragic circumstances, the SAM 26000 remained in service and continued to fly Presidents, Vice-Presidents and other high ranking officials on important missions. It was the aircraft that President Richard Nixon flew to the People's Republic of China during his famous "Journey of Peace" in February 1972, and three months later was used to carry Nixon on his unprecedented visit to the Soviet Union to sign the historic nuclear arms control agreement.

The Smaller Air Force Ones

There were other aircraft that have also served as "Air Force One" for various reasons or occasions. This included an Aero Commander U-4B, which was used by President Eisenhower from 1956 to 1960 – primarily to transport the President from D.C. to his farm in Gettysburg, Penn. It was the first Presidential aircraft to have only two engines, but it was also notable for being the first to have a blue and white paint scheme that may have inspired the First Lady in her design. After Eisenhower left office, the aircraft was used by the United States Air Force Academy's sky diving team!

Eisenhower wasn't the only President that required a special aircraft to ferry him where the larger planes couldn't go. In 1966 the Air Force purchased a Beechcraft King Air B90, which was provided with a special VIP interior and designated VC-6A. It was primarily used to transport President Johnson and his family between Bergstrom Air Force Base, Texas and the Johnson Ranch near Stonewall, Texas. While it was officially "Air Force One" when Johnson was on board, it earned the informal nickname "Lady Bird Special" for the First Lady.

While the VC-6A was a fine airplane, the Air Force also assigned a North American T-29A Sabreliner to transport former President Johnson to his ranch from 1968 to early 1973. The T-39A was retrofitted with a special VIP interior, which allowed the plane to carry six passengers and three crewmembers. As Johnson was not President at this time, the aircraft did not use the Air Force One call sign. However, it was also used to transport many government and Air Force officials until it was retired in 1984.

Not one but six modified Lockheed VC-140B Jetstars – the military version of the Model 1329 light jet transport – were used to transport the President, high-ranking government officials or other heads of states. It could operate on runways too small for larger Air Force jet transports. Johnson used JetStars as Vice President and President and due to its size sometimes referred to the aircraft as "Air Force One Half." Presidents Nixon, Gerald Ford, Jimmy Carter and Ronald Reagan all used the JetStar at points in their respective Presidencies.

The aging CV-140Bs were replaced by the C-20B – civilian designation Gulfstream III – and for two decades these were used to transport Presidents Reagan, George H.W. Bush and Bill Clinton. These aircraft have also been used to carry former Presidents, Presidential spouses, secretaries of state and defense, as well as foreign dignitaries.

While the President may often travel in the VC-25A aircraft, the Vice President, First Lady and secretary of state often use the Boeing C-32 – a military version of the Boeing 757-2G4. When carrying the Vice President it has the call sign "Air Force Two," but since its debut it has served as Air Force One when the President travels to airports that cannot accommodate the larger VC-25A (Boeing 747-based "jumbo" jets).

As The National Interest previously reported, last year Lockheed Martin disclosed that the new VH-92A Presidential Helicopter made its maiden flight. The VH-92A aircraft is based on Sikorsky’s successful and FAA-certified S-92A commercial aircraft, which recently surpassed one million flight hours.

When traveling on such helicopters, these carry the call sign "Marine One" as this denotes a helicopter operated by Marine Helicopter Squadron One (HMX-1) "Nighthawks." These are either the large Sikorsky VH-3D Sea King or the newer, smaller VH-60N "White Hawk."