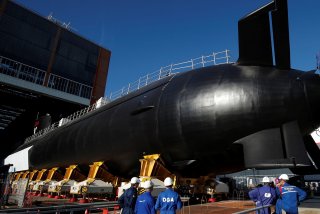 The French Armament Directorate (DGA) will conduct the sea trials, which are expected to last several months. These will confirm the seaworthiness and efficiency of the submarine before it is officially delivered to the Marine Nationale.

"The Suffren has just completed its first dive at sea. An apparently modest step, but much awaited for a first in class ship," said Admiral Prazuck, Chief of Staff of the French Navy as reported by Naval News. "The trials of this formidable hunter are launched, they will last several intense months and we will ultimately deliver a formidable fighter."

The sea trials will initially take place near the port of Cherbourg on the English Channel, and this is where the first static dive was conducted. This consisted of a controlled intake of water into the submarine's ballast tanks, until it could be completely submerged without the use of its propulsion. The procedure is designed to ensure the sealing but also the longitudinal and transverse stability of the submarine while underwater.

After these tests are completed the boat will head to Brest, the port city located in the Finistère département in Brittany, which houses the nuclear missile-launching submarine fleet forming the Force Océanique Stratégique (FOST) of the French Navy. This is where the boat's deep-diving tests will take place. In the late summer or early fall the Suffren will head to the Mediterranean port of Toulon for testing of the submarine's weapons systems including the test-firing of an F21 heavyweight torpedo, an SM39 Exocet Block 2 Mod 2 anti-ship missile and a naval cruise missile.

The sea trials will be carried out under the supervision of engineers and technicians from the DGA, as well as from the French Atomic Energy and Alternative Energies Commission (CEA) and Naval Group and TechniAtome. Submariners from the French Navy will check all of the ship's technical and operational capabilities. During this testing, the vessel will remain the property of the Naval Group but is placed under the responsibility of the Marine Nationale for its operational command and as a delegated nuclear operator.

When all of the testing is completed, the Suffren will be delivered – and that will likely be later this year.

The sea trials had been scheduled to begin in March but had been postponed because of the COVID-19 pandemic. Last month France's only aircraft carrier, Charles de Gaulle, was forced to return to its homeport in Toulon after more than a third of its crew tested positive for the highly infectious novel-coronavirus.

Suffren was officially "launched" last July in a ceremony that was attended by French President Emmanuel Macron. It wasn't the launch in a conventional sense – as modern combat submarines are built using a modular system and can be moved about with modern machinery, so there is no need to ride down a slipway. Instead, the boat was transferred to a dry dock and later floated and its nuclear reactor brought online.

The project is about six years behind schedule but only slightly over budget. This was in part due to difficulties in miniaturizing its 150-megawatt K15 nuclear reactor, which takes up less space and will refueling every 10 years instead of the previous class's seven-year cycle.

Future submarines in the Suffren-class (Barracuda-class) will include the Duguay-Trouin, Tourville, De Grasse, Rubis, and Casabianca. It is intended to replace the Rubis-class submarines and is expected to remain in service until the 2060s.